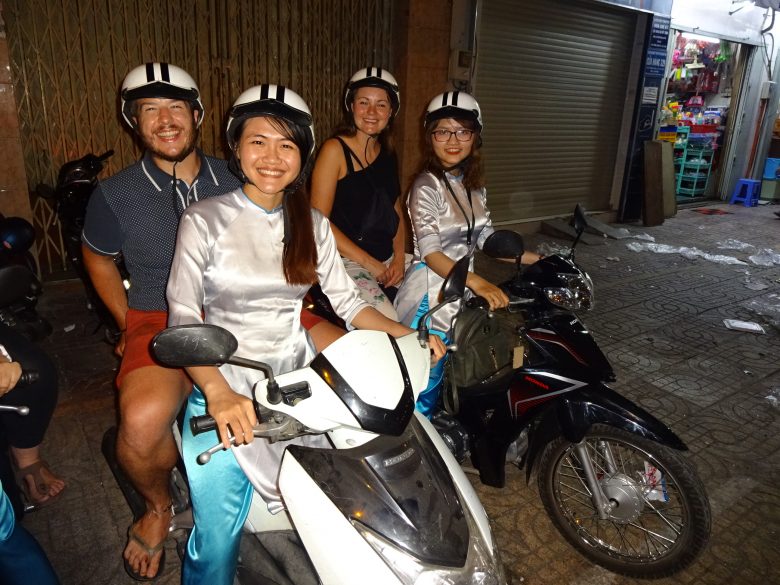 In the run up to our “big trip” Katy and I would have discussions about what aspects of what country we were most looking forward to. Every time Vietnam was mentioned so was food…

The climate, terrain, number of different countries who’ve invaded or traded with Vietnam have all influenced the cuisine you’ll find there today.

Friends had recommended “The Foodie” tour by XO as the absolute one thing we had to do in Vietnam. Considering our budget, $75pp was a LOT of money, but the promo video and promise of unlimited food and beer had me sold. We completed an online booking form, and after a few emails to finalise pick up details we were all signed up.

Saigon is huge and certainly not the easiest city to navigate. There’s 10 million people, 9 million motorcycles and only 4 drivers who’ll stop at a red light. Is this really the best place to be jumping on the back of a motorcycle full of food and beer? Too late now, our guides had just shown up. Introductions and a safety briefing complete (“get on this side, hold here not here, this is hot, don’t move about too much”) we were now whizzing through the Saigon rush hour on our way to the first stop, me with a smile ear to ear.

We arrived at an unnamed restaurant nestled between 2 buildings without a clue as to where we were! There was a table laid out with some ice teas, we pulled up a tiny plastic stool, chatting to Quang Le (our tour leader) until the other 6 members of our group arrived. We all go to know each other and swapping travel stories over some Bun Bo Hue. Quang explained the dish, Bun – the vermicelli style rice noodle, Bo – the thin slivers of tender beef and Hue – the area of Vietnam the dish originates from. Add as many bean sprouts, shredded banana flower and morning glory as you like, maybe some chilli jam too and dive in.

So, that full size dish was the starter we found out as Quang gave us an overview of our evening to come. We’d be making 5 stops (including this one), 2 would be “sightseeing” stops, the others for food. Next stop Chinatown!

The drive here was manic, we went through the main back packer area with bars spilling out onto the street, crossed one of the busiest (and unruliest) roundabouts I’ve ever seen and then navigated through one of the many Chinatown markets where all trade was done between someone sitting on the floor and the other not getting off of their motorbike. We were taught the history of the area, which was the best market to bulk buy 50 pairs of flip flops and some of the laws of the road (yes, apparently they do have some).

Quang explained about how the Chinese people came to settle here, what you could expect to find (everything) in the wholesale markets, and that it was in fact illegal to load your motorbike like the majority of the population chose to do. He also explained how the district system worked and threw in the expected hunger games reference. The iPad with photos, maps and examples was a very good touch. We posed for photos all lined up on the back of the scooters before heading to our next stop, a BBQ restaurant in district 8.

When we were told we’d only be stopping 5 times and only twice more for food I’d wondered how much of a tour this would be rather than just a trip to a restaurant in the suburbs. We were shown to a table in the middle of the big, busy and very local restaurant and sat down on those little plastic chairs, the ones that make me weighing 85kg a bit nervous and unable to get comfortable in. Anyway, it didn’t matter, we were presented with an ice cold Bia Saigon accompanied with some coconut covered peanuts and then the food started coming. First up was okra, covered in a fermented tofu sauce and then grilled, served with more tofu sauce and some extra chilli sauce to dip. Then the restaurant staff brought over the buckets with hot coals and a grill. Our drivers, guides and now chefs cooked chunks of goat, beef, frog (with and without skin), quail and whole prawns which our drivers/guides/chefs/waitresses peeled for us (does it get anymore lazy than this?). Chopsticks ready, we picked up some meat, selected some of the fresh herbs and dipped in the appropriate sauce. The goat and beef was tender with great caramelisation, the frog was bony in places but went well with some lemon basil. Most people preferred it without the skin. It was around the beer and BBQ’d goat moment that I stopped trying to make notes and just got stuck in! At some point there was an omelette style dish which we wrapped in a lettuce leaf or mustard green leaf, dipped in a sauce and tried eating politely. Unfortunately trying to eat these politely sees you making more mess than if you just shoved it in and held your hand in front of your mouth. 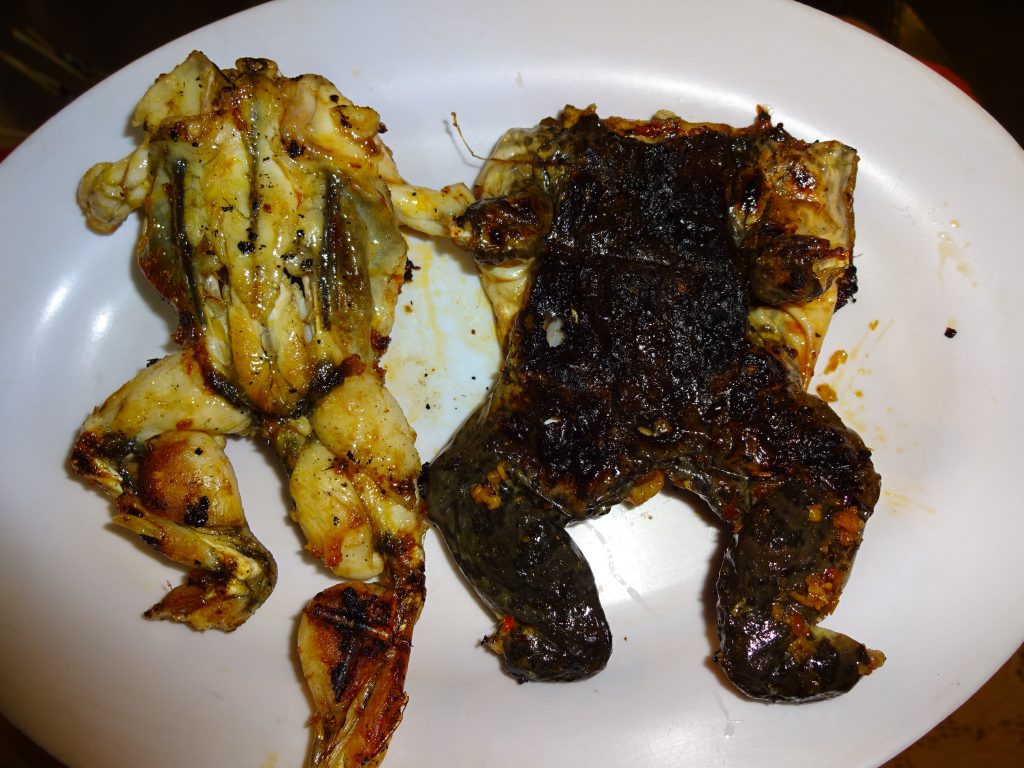 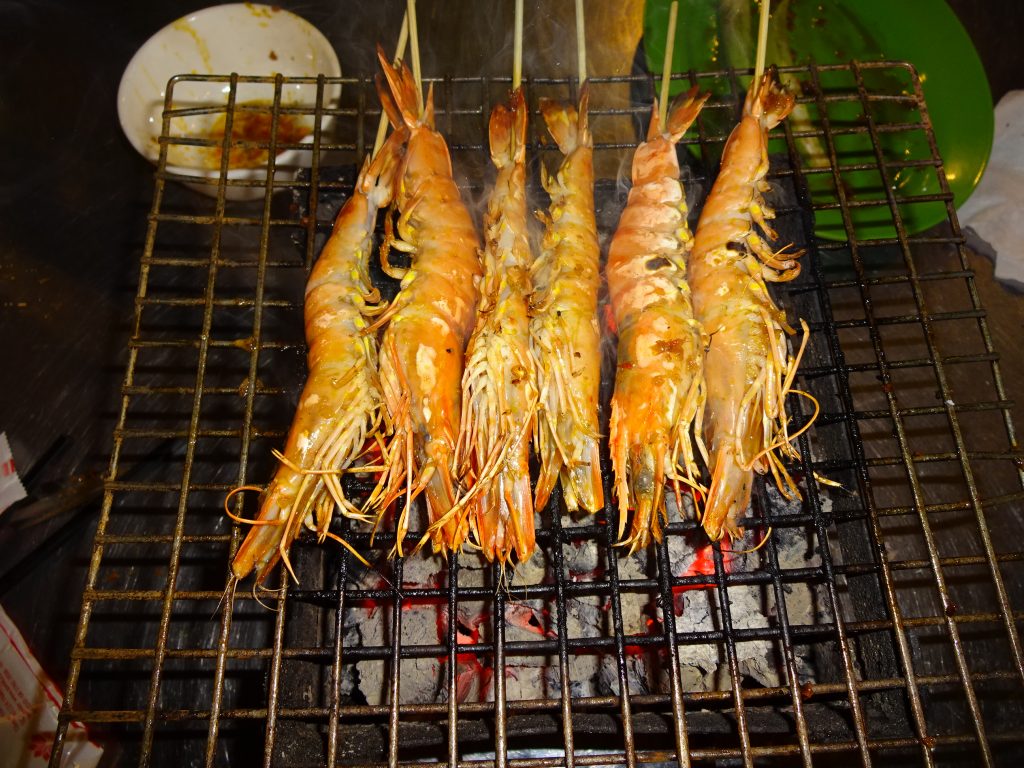 Prawns being cooked in the middle of the table.Once all the food had been cooked and cooked and before anyone fell into a food coma, it was time to play a game. Normally I’m not about the ‘enforced fun’, however the game was simple, required little movement and could potentially allow me to show off the chopstick dexterity I’ve been working on over the last 3 months. The aim of the game, your guide picks a peanut out of the bowl, places it on top of your chopstick, you then have to drop it into the plastic water bottle. Sounds simple? It probably is, but I’m full of meat, beer and nerves! I’m against Katy, the countdown comes sooner than expected and we’re off…

Another great touch was the guidebook you are given, we spent some time practising the basics of Vietnamese language. The book also has recommendations of alternative tours, the best (and most reliable/trustworthy) taxis to use as well as some information about staying safe and avoiding scams in Saigon. If, like us, Saigon is one of your first stops in Vietnam it’s a pretty useful tool which slips into your wallet.

After another beer and discussing some of favourite destinations so far with other members of the tour group it was time to cross the river and head to the ‘expat district’. This area felt like a world away from the hustle and bustle of the city we’d experienced so far. The roads wider and less busy (nobody was driving on the pavements here). Unnamed street-food stalls were replaced with Starbucks, Popeyes Chicken and other western fast food chains. There were modern high rise apartment blocks, communal parks, more cars, less bikes but most noticeably less people. It’s mainly apartments here because foreigners aren’t able to buy a house as they’re not able to own land in Vietnam. Most of the apartments didn’t have anyone in because they’d been bought as investments. The people living here were the super wealthy, the ones who could afford the 200% import tax on brand new cars!

After posing for another photo on the bike, we had a little panic and a 5 minute search for the keys (which had been left on the counter in 7/11) we headed back to the busy city for our final stop in District 4 known best for it’s seafood (and people driving on pavements).

We arrived at another ‘ordinary’ looking restaurant. Low plastic tables and chairs, bins beside each table which didn’t appear to be getting used as your couldn’t see the floor through the litter. Local people enjoying seafood and beer in every direction. We sat down and were given an ice cold 333 beer. Perfect hospitality! First up here was the crab cooked in chilli and salt. I usually have an issue with crab. The issue being that I’m no good at extracting the meat, by the time I have, the rest of the meal has gone cold. Our guides dissected them like pro’s and within minutes we were dipping the perfectly cooked crab meat into a mixture of salt, pepper, chilli and lime juice.

Next up was scallops cooked with onions and peanuts, throw on a splash of kumquat juice, a tiny bit of chilli and you (unanimously) have the dish of the evening. These were absolutely perfect!

The food kept on coming, we were now onto the chilli and lemongrass clams. Again, something I wouldn’t normally order in a restaurant for fear of it being ‘too fiddly’. These were all open, easy to eat and had just the right amount of lemongrass, an ingredient which can be used a little too liberally in some Asian cooking.

We were offered the opportunity to try ‘Balut’ (foetus duck egg) a speciality in Saigon. We passed on this…

As if we’d not eaten enough, we were asked whether we wanted anymore of the dishes before pudding. Of course everyone asked for more scallops. Unfortunately everyone else in the restaurant had enjoyed them as much as us and there were none left! More crab it was then!

Pudding, if I’m honest it didn’t look hugely appetising, maybe because we were absolutely stuffed. We had Rau Cau Dua which is a coconut jelly and was fairly refreshing and a creme caramel (not sure this was a Vietnamese street-food speciality?). Either way, they were small enough to not weigh the motorbike down too much on the way home.

Everyone walked back to the scooters much slower than at the start of the tour, but it gave us all time to agree two things. Firstly, you’d have just walked past these restaurants, looking for the place recommended by TripAdvisor on Lonely Planet. Secondly, those scallops…

$75 per person is a lot of money to be spending on dinner for one evening especially if you’re travelling for an extended period of time and budget is an issue. However… this is absolutely worth it. It’s not just dinner, (it’s more like 3), it’s a sightseeing tour with local people showing you places you’d never find unless you’d lived there for years! It’s 5 hours smiling ear to ear weaving through traffic on the back of a motorbike with a group of like-minded people. Oh yeah, and those scallops…

We booked the XO Foodie Tour

Done something similar? What was your favourite dish?