A weekend in Marrakesh- Take the good with the bad… and enjoy the ride? 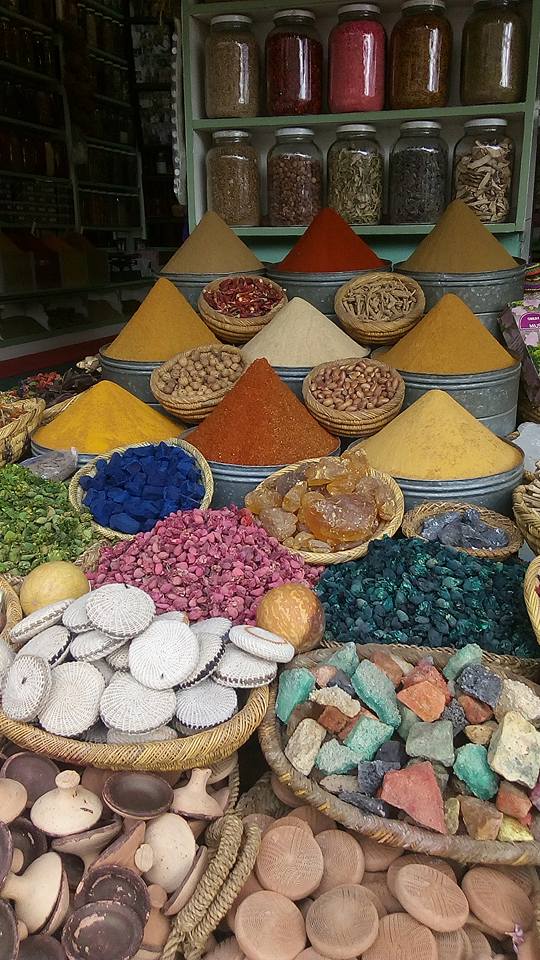 I spent 3 nights, 3 days in Marrakesh, in May 2017, with my Mum!
We flew from London Stansted with Ryanair 6am Thursday morning, and returned on the Sunday at 10am.
We stayed in Riad Chergui, which I found on booking.com and chose based on high review scores. The riad is in a relatively residential area in the mid-north west of the medina, around a 10-minute walk from Jaama El Fna square. The lady who ran the Riad – Emmanuelle was so helpful and I can’t rate this personable Riad highly enough! Stay there!!!!

The Food!
All the food we ate in Marrakesh was delicious and there was so much vegetarian and vegan choice as well (I don’t eat halal, so meat was a no- no for me there).
We ate at Nomad restaurant for my birthday meal. The terrace is uber chic, and when the sun sets, they give you blankets. The food here was Mediterranean/ Moroccan fusion with a modern twist, we shared courgette and feta fritters, beetroot and goats cheese salad, lentils, preserved lemon couscous and filo parcels filled with beetroot, turnip and ginger! For dessert I had cardamom, orange blossom cake which was just to die for.
We also found an amazing vegan café called Earth Café, just off Rue Riad Zitoun, south of the main square. Here we ate vegan burgers and filo pastry filled with beetroot and pumpkin. Freshly squeezed juices here were delicious. The café was so colourful and hip, that we just had to go back a second time!
On the first night, we ate at a standard tourist restaurant overlooking the main square, but again, it was delicious, I had a salad of grilled vegetables with goats’ cheese, honey, fig and walnut drizzled with argon oil, and for dessert ‘orange salad’, which is simply the freshest orange, sliced and sprinkled with cinnamon and icing sugar. Divine.

Riads
I think anyone who goes to Marrakech, or Morocco in general, should stay in a Riad to experience it. Ours was brilliant. We stayed at Riad Chergui, which was run by a French lady, Emmanuele, who couldn’t be more helpful and gave us tips about anything we wanted to know in Marrakech. My iphone had broken and I was in total despair, but Emmanuelle helped me out.
The Riad had six rooms, so average sized for a Riad in Marrakech. Imagine, hustle and bustle of the streets and alleyways and you come across a door. Inside, is a different world, it Is quiet, serene, tranquil, with a beautiful swimming pool and communal area to relax as well as a roof terrace overlooking Marrakech. Such a stark contrast from what is just the other side of the door, and such a wonderful experience.

Sightseeing cheaply
The beautiful sites of the medina and the cost of visiting them: Badi Palace, Bahia Palace, Ben Youssef Madrasa were all so beautiful, and 100% worth visiting. Entrance was 20DIR per person to each of these places, so that is around £1.80. We spent at least 2 hours in each, and you could spend much longer.

The main square at night- drummers and men dancing, with the smell of smoky barbequed food in the background. The sky full of smoke and colour and the constant heartbeat of the drumming! Electric!

Plus, in the souks and the medina, night or day, the smells of the incense, spices and leather filled your nostrils and is like nowhere else I have experienced. You just have to go, to appreciate it!

The animal welfare
So, I’m a vet, but as an ethically minded human being, when you travel, do you look at the animals? I always do. Sadly, in Marrakech, the animal welfare is not good. In the main square and the tourist areas is the worse with monkeys on leads being offered to tourists to hold for pictures. I witnessed one man teasing and dragging his monkey around when there were no tourists. They look petrified, are dressed in clothes and used for human entertainment- not cool. In the squares, they also have snake charmers; the snakes have generally had their fangs ripped out and are also not treated very nicely.
Out of the main square, you will see cats everywhere and the majority are pregnant or have kittens. I don’t think people hurt these cats, but there is no education in place for people to encourage getting animals neutered and therefore prevent over breeding and therefore many stray animals.
Around the main tourist areas there are horse drawn carriages. The horses aren’t in bad condition, but the drivers seem to take pleasure in showing off how they can whip them repeatedly, even sometimes when they are standing still.
The little donkeys, you seen in all northern African countries are the same here as elsewhere. Many are skinny with over grown hooves. There are charities like Brooke, that help donkey owners, but I suppose they can’t reach everyone.
Finally, obviously due to the fact the country is a Muslim country, all meat consumed is halal. Without getting very in depth with my ethical beliefs, I will just say that I do not eat halal meat due to my objection in the way that it is slaughtered.

Getting lost in the souks and losing all faith in humanity
I had a map, therefore I thought, like most other countries I have visited, that I would be able to find my way around. No. We got lost many times. Usually it was easy to find a sign and we were fine. One afternoon, we got very lost and realised we were nowhere near the main tourist areas, there were only locals, as far as the eye can see, and no signs.
Then you hear men following you, coming up to you, “where are you going to, I am free let me show you” and “ah the main square is this way” (along with the standard “hello beautiful” style comments that make you feel grossed out at the best of times and when lost, moderately uncomfortable!). We had been warned about people trying to tell you where to go and telling you the wrong way, and in this case, they did exactly that. In 20 minutes, we had been approached by around 6 different men and each one of them told us the exact opposite direction we needed to go in. As in, we were already about 20 minutes’ walk from the main area, and they were telling us to go further north, in to the middle of nowhere! What horrible people! It made me so angry why someone would do that; what are they trying to achieve? It is apparently so you get even more lost then have to pay them to send you in the right direction, but seriously what absolute arseholes!! I really did hate that part of the afternoon we got lost. It just made me have zero faith in humanity; until that is, I hailed a taxi driver (in desperation) and he was honest and said it would take a long time in taxi as where we were going was in the middle of the medina, so he told us the correct directions- straight down one road (the opposite way the other men had been telling us). Ugh I’m angry now just thinking about it! I hate liars! Unfortunately, I had dropped my iphone on the plane and it stopped working, so I didn’t have the option of google maps or similar which I could have used to orientate ourselves at least- and a worthwhile suggestion for anyone heading out into the medina of Marrakech.

No alcohol at restaurants!

Don’t get me wrong, I love embracing the culture, and maybe I’m a typical Brit, because although the food was divine, what would have made dinner even better, is a glass or wine or beer with it! There are some bars in Marrakech, but most restaurants in the medina don’t serve alcohol (the new town hotels and restaurants do). So, we would end up having dinner then heading back to the riad for a night cap instead of a bar, or with our dinner… which kind of killed the mood a bit.

If you’re walking about in the medina, I would probably suggest closed toe shoes. The souk owners are very proud and do wash the street outside their shop with water, but the streets aren’t clean, so you will get various liquids or plant material stuck on your toes at some point if you wear open toe shoes. As I said to my Mum at the time; “its fine I don’t exactly suck my toes” … but for any health conscious or toe- sucking people out there- it might be a good tip to wear a closed shoe!

So maybe I’m being ignorant and ‘not seeing as the traveller sees’ the real Marrakesh and embracing it… but I think I did see the real Marrakech. Don’t get me wrong, I didn’t hate Marrakesh at all… I adored it for all the reasons I listed as ‘good’! I would always encourage anyone to visit there to experience the amazing architecture, sights, sounds, smells and colours of the medinas, but there was just something… something that made me feel a little uneasy.