Copenhagen in a day 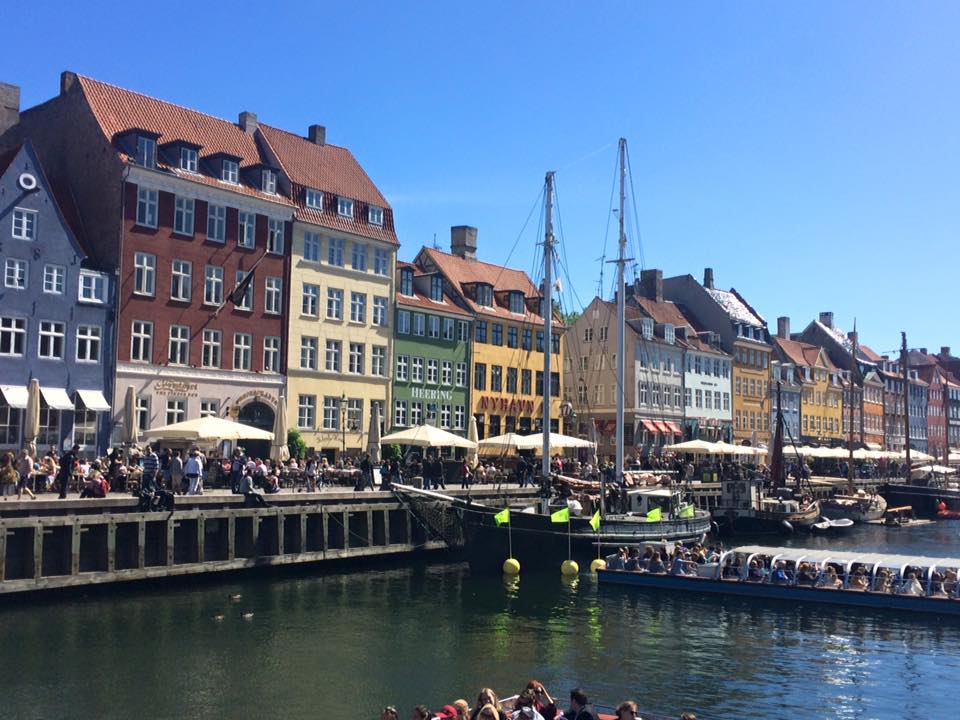 Picture the scene; it is 530am on a damp, grey March morning and I am stood in a queue at London Luton airport, to board a plane, with a coffee in one hand and my phone in the other, feeling quite warm, moderately irritable and very tired. We’ve all been there; and no one likes mornings when it’s THAT early.

So, we’re queuing (we’ve been firmly asked to queue by the also moderately irritable ground staff, even though no one can even see our plane yet), and I notice I’m standing next to a sign advertising EasyJet’s new route to Copenhagen from London Luton. Cool! Never been, never hugely considered it top of my list as a destination, but lets’ pass a minute in the queue and have a look at this new routes’ prices.

I open the EasyJet app and select a random date the next week for a return flight from London Luton to Copenhagen. £5.99. WHAT! It must just be because it’s next week. I try a day in May, June, the same; I try a Saturday and Friday night, a Wednesday – all the same price! “Wow this is so cheap! Lets’ go!” Mark’s halfway through his chicken and avocado bagel, but manages to communicate that he thinks it’s expensive to stay there, and we’ve not got enough money now for it.

So, open other apps: air BNB, Booking.com, do confirm it can be quite pricey to stay there (Mark is of course, right), and Mark is not keen.

Fast – forward five days; I’m back from my trip and I’ve bought return flights to Copenhagen for myself and three girlfriends, for £11.98 per person on a Saturday in June, for a day trip!
We had been looking at accommodation, things to do there, cost of everything and weighed it up:
– The flight time was only around 1 hour 15 minutes.
– The flights were so cheap yet accommodation seemed more expensive.
– We were four girls with not much cash, a lot of energy and a desire to explore.

LETS GO TO COPENHAGEN FOR THE DAY!!!

A relatively early flight around 7am arrived in Copenhagen around 930am (1 hour ahead). On the plane, I happened to be seated next to an air stewardess, who was also going to Copenhagen just for the day! It was her third day trip here and she was travelling with friends to go to Tivoli Gardens, as they like rollercoasters! It was great to meet other like- minded, travel- loving, thrifty people!

Travel into the centre of town was super simple: train tickets were easy to purchase at a machine and the total duration of the train journey was around 15 minutes! Not even enough time for us to do our make up!

We departed the train at Norreport station, rather than Central Station, as we wanted to do a round loop of Copenhagen (see map).

A 10-15-minute stroll (Charlotte nearly got run over by cyclists – multiple times!) took us straight to the buzzing, colourful, harbour hub of Nyhavn. 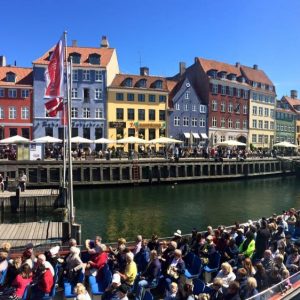 We were just incredibly lucky to have glorious sunshine for the entire day. Even by 10am the suns’ warmth was enough for us to only wear one layer.

We mooched around Nyhavn, took pictures of the colourful harbour front buildings, then decided we were ‘on holiday for the day’ (and needed some Wi-Fi to Instagram our pictures!!) so had a cocktail at 11am! It was lovely to sit in the sun chatting and catching up. The atmosphere even at that time of day was buzzy and everyone seemed in great spirits because of the weather.
We had our drinks in a harbour side bar/restaurant. A cocktail cost around £8, so similar to U.K. prices. As you may be aware, Scandinavia is not cheap, and I had budgeted around £50-60 for the day… 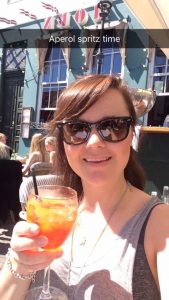 From Nyhavn we boarded a Netto- Badene boat trip for six euros per person. These open topped boats leave every 20 minutes and do a circular route around the canals of Copenhagen, with regular stops for you to disembark. They have head phones to give you a guided commentary of the sites you pass along the way in many different languages. 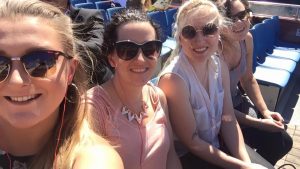 The boat passed various sites such as the historical naval base for Copenhagen, Academy of Arts and the Arsenal Island. The recorded information over the headphones also informed us that Denmark is the 12th biggest country in the world (by land mass), which I didn’t know, as it includes Greenland and the Faroe Islands!
The boat did a U-turn at the Little Mermaid, which was, little… and rather underwhelming. Though again, the ear phones told us some interesting facts about Hans Christian Anderson.

After consulting our maps, we decided to disembark at Amalienborg Palace, the Royal Palace of Denmark. We spent an hour or so wandering around. The area was beautiful; the grounds and Frederik’s Church were stunning inside and out.
We had a few pictures here, then decided to follow our tummies in search of some food as it was almost 1pm. 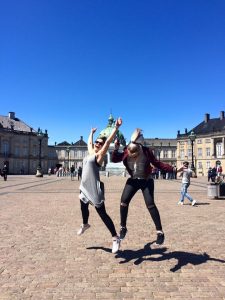 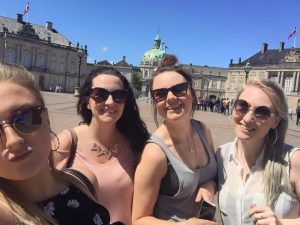 As you can see from the map (see bottom of the blog), we walked from Amalienborg Palace to the area of Frederiksholms Kanal and lunched at Krog’s Fish Restaurant. This took around 30 minutes at a slow-ish pace. We weren’t really sure where to eat, except that we wanted Danish food, and Krog’s Fish Restaurant had pristine white table cloths and pretty flowers on the tables outside, which was inviting, so we chose here.

I had smoked herring on a rye bread style cake, with new potatoes, radish, sour cream and lots of dill. Dill is one of my least favourite flavours, but I embraced it in this Danish dish and it was actually, really well balanced and tasty.
Again, as with all of Scandinavia, it wasn’t cheap, but it was similar to prices in the U.K (around £13 per main course).

From here, we mooched around the Frederiksholms Kanal area and then visited Christiansborg Palace – the Danish parliament. We wandered around the riding grounds and grounds of the palace. There were some interesting sculptures outside the palace grounds, of a bear on a spike, which was apparently symbolic of global warming and the environment. 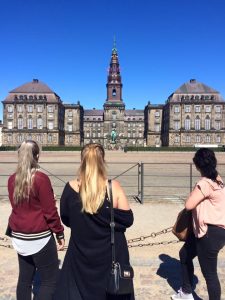 A couple of us had sore feet at this point. Handily, we crossed the road from Christiansborg Palace and stumbled upon a floating bar and fake beach(!!) moored by the canal side at Borsgraven.
Here we sat for two – three hours drinking Danish Cider and snacking on chips and hot dogs. It was such a lovely way to relax after a busy day on our feet. It was so busy here, the locals were in their bikinis at the side of the canal, on this floating, moored restaurant/ bar, with deck chairs and sand laid out to create a beach. 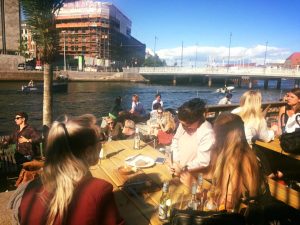 A 20- minute walk to central station around 7pm took us back to the airport for our 9pm flight home. I was in bed at about 11:30pm! A long tiring day, but we all agreed so much fun!

What I liked so much about this day trip, was how accessible the main ‘sight-seeing’ parts of Copenhagen were and how easy it was, for an average, mobile person to walk to everywhere in the city. Obviously, we did the boat trip out to the mermaid, but then walked again from where we disembarked. Even though food and drink were relatively expensive, in comparison to other parts of Europe, public transport was cheap and reliable and I did not spend more than I had budgeted (and we did sit and have quite a few drinks) … oops!
All in all, it was such a fun day out and we were all so glad we went.

I now think EasyJet may have discontinued this route? As I can no longer find it when I search? If this is the case then this is such a shame!

A good tip for anyone looking for cheap flights is to regularly check EasyJet or RyanAir websites such as http://corporate.ryanair.com/news/ as sales and new routes are always advertised here first!
You can regularly find flights for less than £20 each way if you’re aware and always on the lookout! Why not set is as your home page!