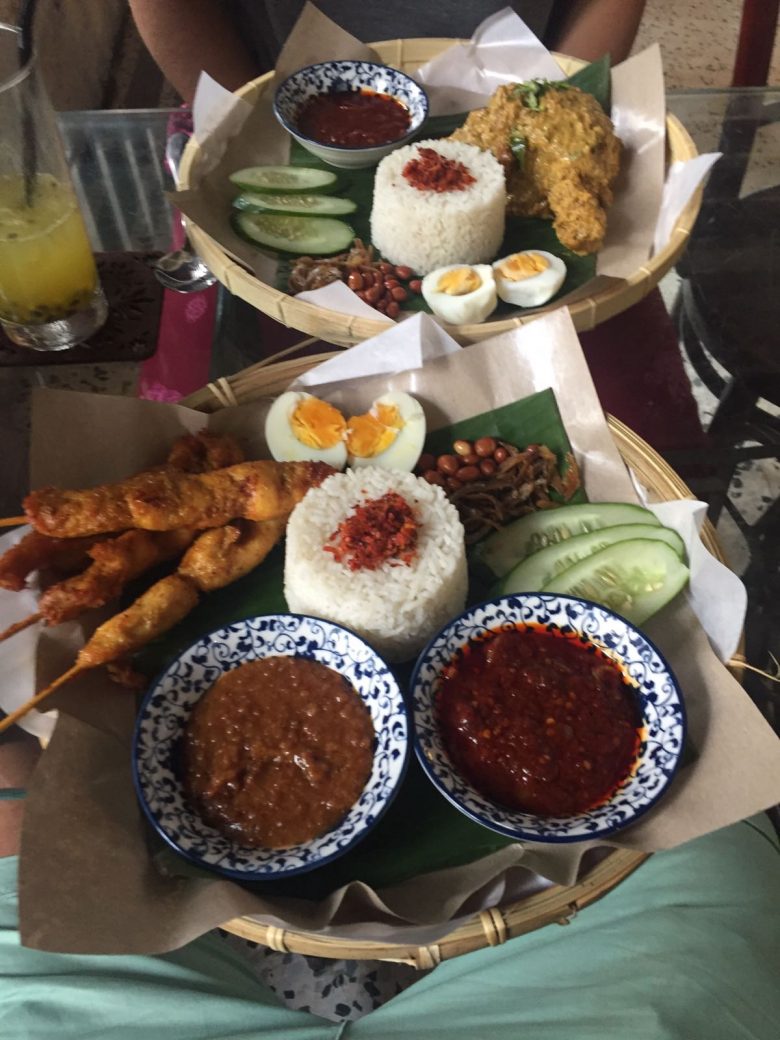 Malaysia is such an ethically diverse country and the Malay, Peranakan, Chinese, Indian and Western influences also show in its’ food. Basically, there’s something everyone will like, and if you love food, you won’t stop eating!

Here’s a summary of our food journey through Malaysia.

One of the best places to sample Peranakan cuisine. Melaka was a Portuguese, then Dutch, then British Port in southern Malaysia. Due to its location it was also a popular spot for Chinese immigrants and tradesmen who sailed here and settled. When a Chinese married a person of Malay descent, the family were called as ‘Peranakan’ or ‘Straits Chinese’, and their traditional food is a fusion of both cuisines.

We booked a table at Nancy’s Kitchen and were glad we did, as the queues were out of the door! Recommended as one of the best places to eat Peranakan food in Melaka, it was popular with locals and tourists. We ordered Popiah for starter- a kind of flower- shaped taco, filled with vegetables. Like a spring roll I suppose. For main we ordered Candlenut chicken, Tamarind duck and mixed vegetables with rice. We thoroughly enjoyed the Candlenut chicken, which was strong with lemongrass but smooth with the candlenut, which is similar in taste and texture to a macadamia. We weren’t very impressed with the duck, but mainly because it was more bone than meat.

We also had a sweet refreshment of Cendol here in Melaka. Crushed ice, with pandan jelly (green noodles), red bean curd, coconut milk and lots of sugar or jaggery syrup! Not hugely visually appealing but really moreish! This was found all over Malaysia and definitely worth trying! (You can also get it topped with Durian, for the more daring amongst you!)

The mixing pot of all cuisines in Malaysia – if you want a dish from a certain region, I’m sure it can be found in KL.

In Little India we dined at Sangeetha Vegetarian Indian restaurant during the busy lunch period and were hugely impressed. The thali was amazing, and the masala tea was the best I have drank outside of India.

In China town, we pulled up a plastic chair at a busy street food stall because we were intrigued by the thick brown noodles we had not seen before and ordered it. It turned out to be Hokkein Mee, served KL style. It is a traditional Malaysian and Singaporean dish which originated from the Fujian Province in China. It is thick egg noodles (like Udon noodles), coated in pork lard and dark soy to glaze and give it the distant dark- brown colour, with prawns, squid, pork and cabbage tossed in. We had it meat-free and it was still delicious. Unique tasting. In other parts of Malaysia, it is not dark-brown, as they use light soy, so this dish was traditional for KL.

We actually tried Nasi Lemak, one of the main Malaysian dishes, for the first time in KL, in a restaurant next door to our hostel. It was served on a plate, slightly different to street food versions, but the ingredients were the same: Coconut rice, served with sambal and a choice, usually, of rendang, satay or fried chicken on the side, topped with crunchy anchovies and peanuts. Delicious.

Tea plantations and strawberry farms as far as the eye can see! This beautiful area still holds onto its British heritage. It’s also much cooler than the rest of mainland Malaysia due to its elevation, which is bloody lovely after a few days in KL or Penang, melting!

We visited two tea plantations, both of which had amazing views, and secondly served the most delightful afternoon tea, scones and shortbreads! At the first, we ate afternoon tea – scones with jam and fresh cream, and exquisite tea. The second, Boh, was owned by a Scottish family, and the shortbread was just melt-in-the-mouth delicious!

That evening, we visited one of the many Indian restaurants dotted along the high street. Mark ate curry on banana leaf, whilst I was in a decadent mood and opted for a paneer masala and a garlic nan bread. It was excellent!

We were very excited about Penang. We stayed in Georgetown but visited other parts of the island. However, we were on some kind of curry craze, and when there actually ate Indian food 5 times in 4 days! Mark also discovered his love of Jalebi here, along with other Indian sweets. Now, every time we go to a new city, we have to visit Little India or similar, to find Jalebi!

We were also very keen to try Laksa, and particularly Asam style Laksa- unique to Penang. Asam Laksa is heavy on the tamarind – dried and juice of, and is traditionally an oily fish broth such as mackeral, with the tamarind added, then the noodles cooked in the broth. The Laksa is then topped with chunks of pineapple, cucumber, fresh mint and fresh chilli. We ate Laksa for breakfast at Nonyas Vegetarian on Armenian Street, and also the traditional way with fish, at My Own Café, on Canon Street. Both were delicious. The Asam Laksa is a unique taste, with the amount of tamarind it is pretty sour, but the fresh mint and sweet pineapple really counteract it perfectly. It was my favourite Malaysian dish. I also drank it with nutmeg juice – another first for me, and great for breakfast- apparently so good for you and very refreshing.

Finally, Rojak. Another unique dish; a fruit and vegetable salad, with a sticky sweet and sour dressing. The dressing is made from palm sugar, tamarind, chilli and sometimes shrimp paste! Then this is drizzled over fresh fruit and veg such as pineapple, melon, cucumber, beansprouts and sometimes spinach, with crunchy peanuts on top. Very sweet and sour, but we really enjoyed it. I do have a thing for tamarind though, which could explain why.

Malaysia really is a melting pot of delectable cuisines from the region and it’s history. We LOVED eating our way around the country.