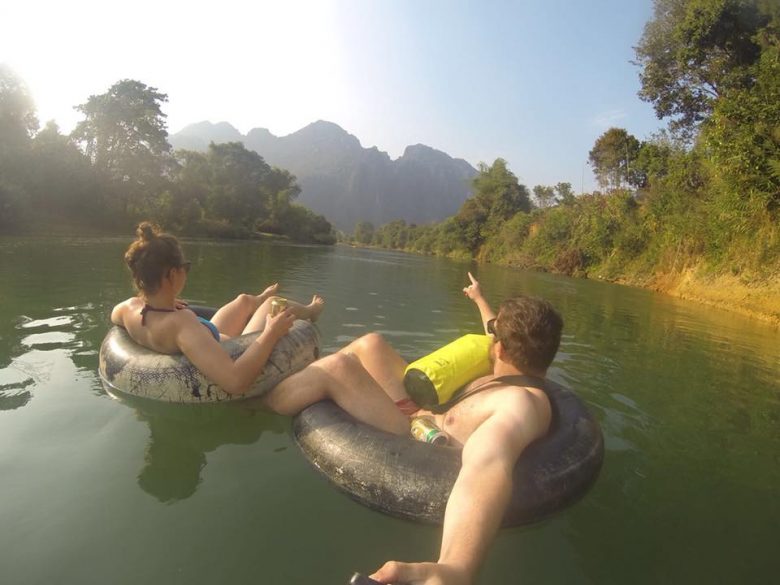 Since the rave platforms along the river here were shut down in 2012, due to the increasing number of deaths of young travellers under the influence, Vang Vieng has apparently been trying to re brand. Dope, magic mushrooms and drunk young Westerners are out and activities such as kayaking, rock climbing and hiking are very much in.
It was a convenient stop between Luang Prabang and Vientiane for us, but we arrived with very few expectations.

We decided to stay in Vang Vieng for 3 nights and 2 full days and due to booked air travel from Vientiane this was not extendable.

We stayed at Pans’ Place in a private double with shared bathroom and paid around £6 per night for the room (which is fantastic value for money) in a convenient location central in the town. The private rooms were like large sheds in the garden at the back of the hostel, and very cold, but, clean, and with comfortable mattresses and adequate blankets (when you ask for more).

Vang Vieng town: Don’t expect its’ new image to mean gentrification: The town, is tired, scruffy and lacks appeal. Sometimes this means it has charm. If it does; we didn’t find it. That doesn’t mean we did not like it; just that it functioned for its purpose of us eating, drinking and sleeping there, but we had no desire to hang around the town and soak it up; like for example Luang Prabang.
There is a high number of South Korean tourists now visiting Vang Vieng annually and the restaurants and bars are attempting to cater for this.
There is, however, still, a disproportionate number of young (18-25- year old) Western travellers, a LOT of dreadlocks, an occasional whiff of cannabis and many questionable outfits, with a hedonistic vibe looking to party and get high. A few bars serve ‘happy pizzas’ and such like and these are well advertised in hostels etc, to encourage people to do it there and not on the streets.
We found a couple of places in town we liked: ‘Green Restaurant’, over looking the island near the Aussie has splendid views and serves Western, Laotian and Thai food of good quality- I would highly recommend the massaman curry. Also, Gary’s Irish Bar serves British comfort food- we went there for a ‘Full Irish’ breakfast – their Cumberland sausages are imported from the U. K(!) and it was really what the doctor ordered.

Tubing: Mark and I went tubing. The process was straight forward – pay your money, get your tube (tractor tyre inner tube), be transported around 4km north of the town to a section of river and that’s it.

So, we hopped in our tube and let the current take us downstream. It is dry season in Laos, but I don’t think we were expecting it to be QUITE so slow! But nonetheless it was relaxing. After only a few hundred metres, we came across a bar on the riverside pumping out some banging tunes. A man on the river bank threw a rope to us and pulled us to the side, were we dumped our tubes and headed up to the bar. Beers were triple the price they are back in town and we were the only people there! Such a shame as the music was banging and the atmosphere could have been fantastic. Remnants of the ‘death slides’ were visible (concrete steps and top of the slide but no slide) as were the rave platforms; now decked out with cushions and bean bags for sunbathing and chilling.

Beer could be taken on the river, so we got a couple of tins and headed back to the river. We chose to stop at another bar, which looked busier and because my tube was getting increasingly flat! Again, good music, food, drinks, even zip-lining was on offer here, but there were again just a handful of other people here; the majority of which, were excitable South Korean men, taking selfies, who had been kayaking with a tour group. The rest of the time was spent ‘soporifically’ journeying downstream, enjoying the sun, the beers, the conversation and the tranquillity. We passed lots of kayaks in the first section, and some villagers on the river bank, but the rest of the time we basically had the river to ourselves (and a couple of water spiders who only decided to jump out of the water onto ME… is there anything more horrific than a large, swimming spider… needless to say the tranquillity was shattered for a while then!).

We finally reached the finish point of tubing (i.e. when you reach a bar in the town), SIX hours after we began! It was almost sunset, and we were a little cold by the time we stopped!

We had had a fun day.  As a couple, it was nice to chill out and chat and have a few beers and watch the world go by in your tube. As a group of friends, I imagine it could get a little tedious; what with the significantly reduced popularity of it (ten times more people were kayaking than tubing), the empty bars and the tranquillity.

Hiking: A lovers of hiking, we jumped at the chance to get out of the town and into the countryside, which is where the main appeal of Vang Vieng lies. Large limestone outcrops amidst paddy fields, with caves to explore and summits to reach make it a mecca for hiking. We set out on foot with the plan to climb Pha Ngern – to a view point at the summit. It was around 3km out of town, but on flat roads took only half an hour to reach the start point for the ascent. Shaded the whole way up, the ascent was a real leg burner and we were sweating buckets by the time we reached the first view point. 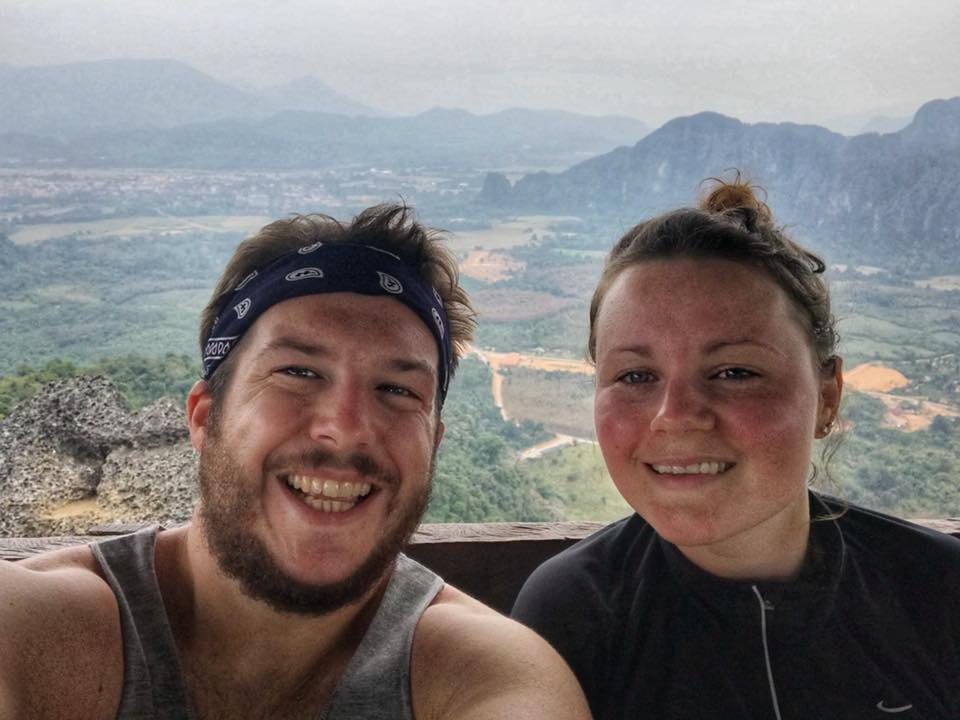 The summit was another 20 minutes up apparently. We felt defeated, but we had really timed it wrongly and were in desperate need of food and knowing it would still take one hour or more back to town, we decided only to hike to view point one. The view was still lovely (although the weather was a little overcast therefore the pictures aren’t fantastic). If we had set of in the early morning, after breakfast we would 100% have climbed to the top, but as it happened, we reached the town around 345pm in the afternoon, so would have been almost sunset back in town if we had climbed to the top. Many people cycle or rent motorbikes to reach the base – the added 6km of walking was free, but obviously added time to the hike, plus cycling could have saved some leg power!

All in all, we warmed to Vang Vieng and enjoyed our stay. With more time there we would have done another one or two hikes and visited nearby caves. The rock climbing schools are also getting really good feedback. If we had visited here ten years ago, like some of our friends did (and had a very different experience to us) I’m also pretty sure we would have loved it as 21 year olds! BUT, if it was still as it was ten years ago, NOW, our little livers and lack of enthusiasm for drug use would have meant we’d given it a miss and headed straight to Vientiane. So, all’s well that ends well.