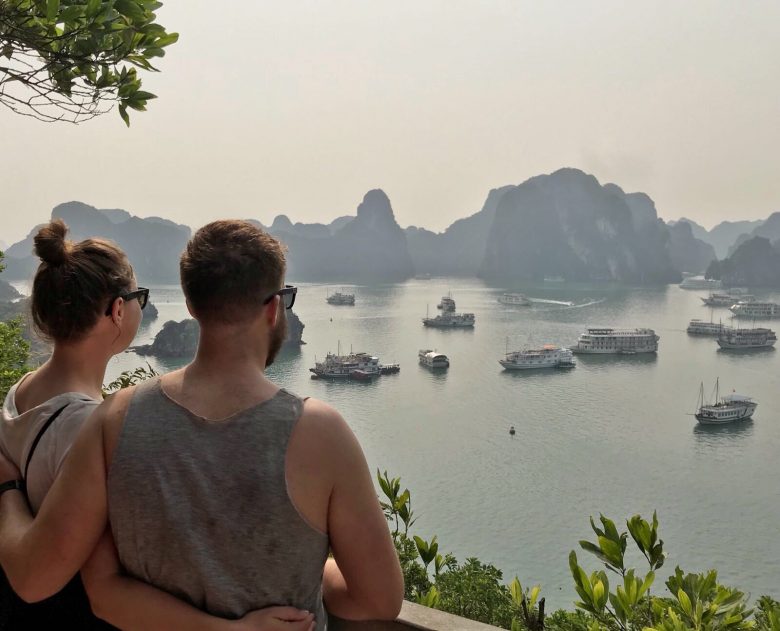 Ha Long Bay was one of the areas I’d done the most research on before we left the UK. We knew what we wanted; to visit Cat Ba Island, Lan Ha Bay and to do some kayaking. We also knew what we didn’t want; a party boat full of fluorescent full moon party vest wearing “bros” or the boat with bifocal cabin windows. We also didn’t want to have to remortgage the house to experience this.

With a decent review in Lonely Planet, reinforced by some word of mouth reviews when we were in Laos we spoke to Vega Travel to book our cruise around Ha Long Bay.

Like with anything which comes recommended, you may need to book a few days in advance. We got in touch with them a couple of weeks before and had no problems. As soon as we’d booked our accommodation in Hanoi we let them know and they told us the pick-up time.

They weren’t lying, our guide Binh was enthusiastically loading our bags into the bus and we were leaving breakfast. We picked up a few more people on the way to the Vega Travel office where we paid the balance, jumped back on the bus and settled down for the 4 hour journey to Ha Long city. After getting everyone to introduce themselves (oh god!), Binh went over the schedule, told us a bit about himself and spoke about Vietnamese culture in quite an amusing way.

We arrived at Ha Long Marina and it was reminiscent of the 18-30’s package holidays I went on 13 years ago where you are driven around nervously waiting to see whether the pictures in the brochure actually look anything like the place you stop outside. We were ushered onto a small boat with bench seats (cue the “which one is my room?” jokes), told to put life jackets on and driven literally 25 seconds before stopping alongside another boat and being asked to take the life jackets back off. We boarded the bigger boat and went up to the main deck (trying to sneak a look at the beer prices in the bar menu) where we were given the keys to our cabins for the evening. Bags safely in our cosy cabin we went up to the top deck for 360 views as we left the marina. We were barely up there for 20 minutes before Binh shouted up that lunch was ready.

If you’ve ever been on a group tour in Vietnam where a meal is being provided you’ll know that the food doesn’t all arrive at the same time. If you’ve not, now you do! We were served a feast including squid, prawns, veggies, tofu, rice and a few meat dishes. It was clear that nobody was going hungry on this trip! Drinks on the boat weren’t too expensive either, there was a local beer available for around 30,000vnd (£1) so we had a couple of them with our lunch too.

This afternoons activity was kayaking around Bai Tu Long Bay just north-east of Ha Long Bay it is much quieter. After conquering the Mekong we were absolute pros at kayaking now and were able to navigate whilst taking the odd photo on the GoPro with only one minor disagreement. We visited a couple of caves, the second of which involved a short but pretty sketchy scramble around the side of a lagoon. Everyone had to use the torches on their phones to see where they were going, but we ended up in a warm cave with huge glittering stalagmites. Worth the risk of falling into the lagoon! We saw the sun set from the water. What a great couple of hours.

Back on the boat everyone showered then gathered on the top deck, some with beers and the people ‘on holiday’ were treating themselves to happy hour cocktails. Before dinner this evening Binh was showing us how to make fresh spring rolls. Again, after travelling for so long we’re spring roll pros now, however everyone seems to have their own way of doing it, something I’m sure we’ll do when we go home too. Spring rolls rolled (and consumed), the tables were set for dinner. Like lunch, the food just kept on coming. We started with huge prawns then grilled oysters with a bit of chilli sauce. Rice, fish, squid, tofu, vegetables and some more meat dishes followed. Everyone was stuffed.

After dinner with a prize of ‘free beer’ we were persuaded to play a couples of games. The first was to use a straw to pick up an empty glass. Our table won. Next, to drop a bottle top into a glass – I’ll say nothing more than we also won this one. The staff all went to eat their dinner and left us squid fishing on the front of the boat. A few simple games had everyone really laughing… this then probably scared all the squid away that or we’d eaten them all over the previous two meals! We retired to our cabin and put the heaters on before bed.

What a sunrise! We’d slept really well. In case you’re worried, it just felt like a normal nights sleep. The view from the window in our cabin was amazing, the view from the top deck even better! We’d got an early start this morning as Binh wanted our group to be one of the first into Dau Go cave. The cave was big and had great views of the bay but we’d arrived from Tam Coc and Phong Na which is why it didn’t ‘wow’ us as much as others in the group. Next stop was Ti Top Island and it’s panoramic views of the bay. 5 minutes of (427 (apparently)) steep steps sees you at the top of the 100m high viewing platform. The views were great and not as crowded as we’d expected. 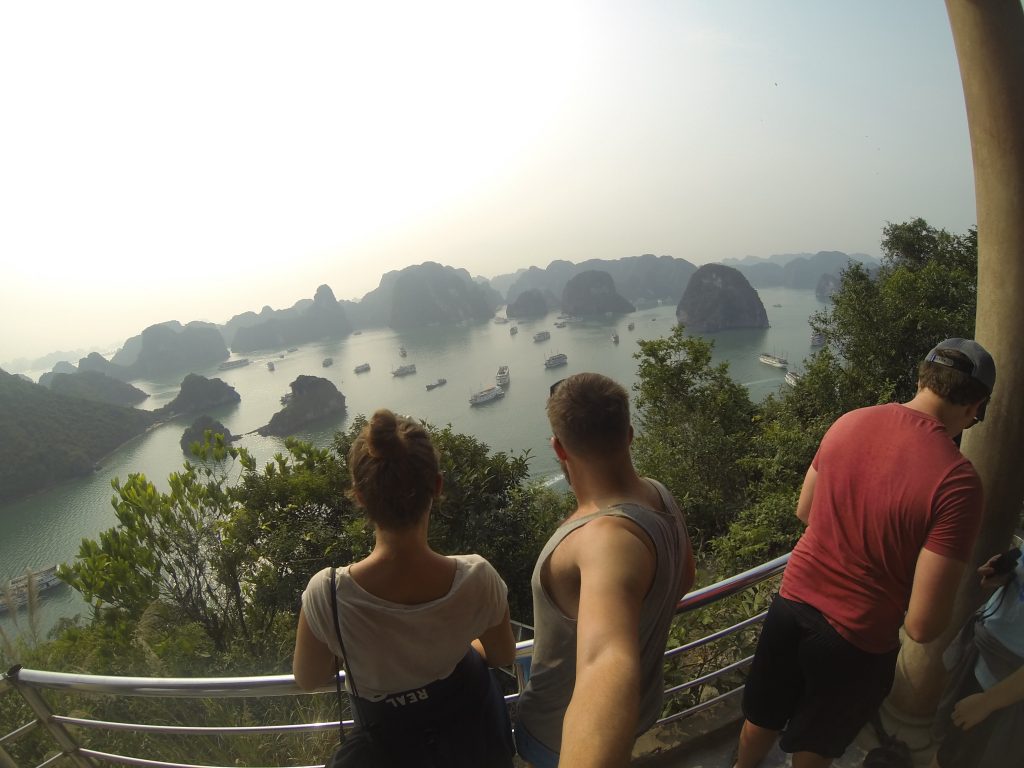 We’d been told we’d need to switch boats today as we were staying on Cat Ba Island this evening and another group on a 2D1N tour would be “borrowing” our boat. There was no waiting about, the transition was pretty straightforward. Now on the smaller boat, we were on our way to Cat Ba Island for a cycle tour and trek before lunch. I was a little sceptical about it being called a trek as it was only for 90 minutes, but the route we took and the terrain we covered was really enjoyable. It was the perfect difficulty for the amount of time we were on the island. There were more impressive views from the peak of the trek and by the time we’d got back to the boat everyone was ready for lunch.

Lunch again didn’t disappoint. Even though this was a different boat with a different crew the lunch was still as good as before. Lots of seafood, vegetables and rice.

There was more kayaking on plan for this afternoon, this time to visit some of the floating fishing villages. We set off with Binh explaining that you’ll only find the floating fishing villages in Cat Ba as it is in a different province which allows new settlements to be built. The only floating accommodation in Ha Long bay can be used for tourism, e.g. kayak rental. Some of the fisherman had children who go to school on Cat Ba and would travel everyday by boat. We finished our kayak tour by entering a lagoon. Once inside the noise of generators from the floating settlements and hum of boats engines disappeared and it was creepily silent. We relaxed here for about 30 minutes before heading back to the boat. We enjoyed the rest of the afternoon sun with some beers on the top deck of the boat before heading to Cat Ba port.

Binh had mentioned that’d we’d be staying in the best hotel on Cat Ba and he was right. Everyone enjoyed the sunset from their balconies at the Hung Long Harbour Hotel and commented on how seamless the day had been. A few of the group went out for dinner with Binh that evening, we’d napped so went out a bit later and stumbled upon a nice vegetarian restaurant. Another fairly early start as we would be heading back to Hanoi tomorrow.

Well rested we enjoyed the buffet breakfast at the hotel before jumping on the minivan back to the harbour. There were no activities planned for today other than enjoying lunch on our cruise back through Ha Long Bay. The lunch was very good, the views spectacular! Everyone got their final photos as the harbour came into sight.

There was no waiting about, there was a bus waiting for us to be taken back to our hotel in Hanoi.

Sitting here writing this I’m still unsure how we managed to cram everything into that second day! There’s no way you’d be able to recreate the trip by booking the individual elements. Sometimes, when a tour promises so much you can end up feeling a little short changed because you were rushed between activities not spending long enough to actually enjoy it or learn anything on the way. The activities on this tour were just the right amount of time and difficulty to keep everyone happy. It definitely helped that our group were all of a similar age and physical ability, but that wouldn’t have mattered if we hadn’t had a guide who clearly enjoys doing what he does.

There’s over 500 companies offering similar cruises in Ha Long Bay so you’ll be able to find something to suit your requirements. You’ll just need to do a bit of research before you go! Maybe even start with Vega Travel?