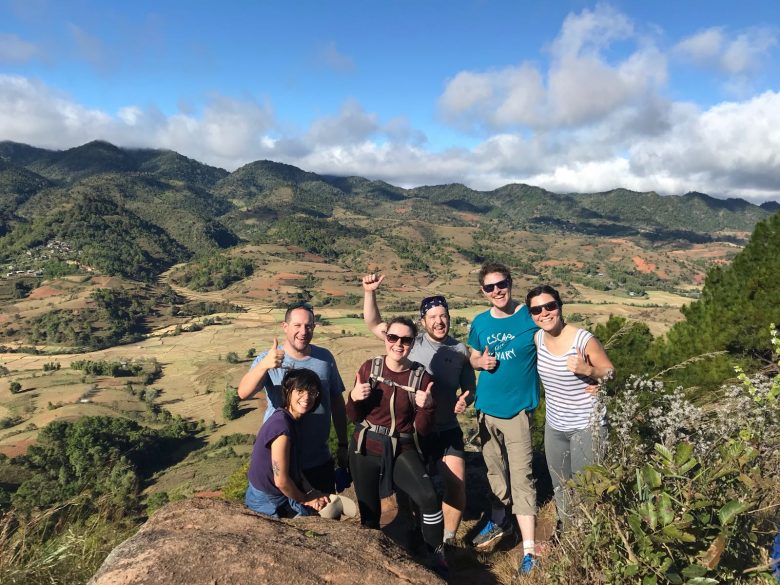 We’d decided to take the day time JJ Express from Bagan to Kalaw and had requested the front seats. Katy full of enthusiasm and Dramamine and me, full of Immodium and hope! We arrived unscathed, checked in to the hotel then headed into town to book our trek.

We’d done some initial research and had a shortlist of the “companies” we wanted to get a quote from. First up was “Sams Trekking Guide”, recommended by Lonely Planet as well as our hotel receptionist, 40,000k (each) would give us approximately 60km of trekking over 3 days, spending 2 nights with families in local villages, finishing with a boat trip across Inle Lake to Nyaungshwe where we’d be reunited with our rucksacks. All this in a maximum group size of 7.

Next, we investigated “Ever Smile”. Unfortunately, their offices didn’t appear to be open. If they were (and ever read this) my advice would be for them to not make it look like you’re about to walk into somebody’s kitchen unannounced.

Finally, we checked out “A1” which offered a very similar package to Sams, but the sales pitch didn’t feel as helpful and we kind of felt reassured by how busy Sams Trekking Guide was, so we returned and booked with them. Back to the hotel to prepare our backpacks for our mini adventure within our big adventure. It seems that every other building in Kalaw houses a trekking business so if like us you have an afternoon spare go and speak to them to see what they offer.

Day 1
6:00am the alarm started going off and we questioned that final rum sour in “Hi, Snack and Drink”. We filled our tanks on pancakes and bananas before checking out and heading down to Sams with rucksacks and backpacks. Our luggage was tagged with our Nyaungshwe hotel address and our group number was called. Joining us for the next 3 days were Xavier and Stella from Australia and Bulgaria and Jon and Paulina from Belgium and Belgium (via Mexico). Leading us was Chi Ou a local man from the Pa-O tribe.

We set off whilst continuing our introductions and the town slowly transformed into hills, fields and farmland. We chose to take the more scenic route through the green tea, ginger and orange plantations to where we’d stop for lunch. This consisted of pumpkin curry and chapati’s as well as crisps, guacamole and a selection of fruit and a pretty epic view!

The afternoon terrain eased us back in gently walking mainly on dirt roads only having to move over every 20 minutes or so. We entered a small village where all you could hear was the sound of children “learning” (school across Myanmar seems to be an extremely noisy environment), Chi Ou told us we could look around the school as they would be going on break soon. As we approached the noise grew louder and the children came careering out of the doors running in all directions. Turns out this was so they could all go and pick flowers for the females in our group. After a few minutes of “min ga lah bah” (hello), and showing them photographs we’d taken, we said “Ta ta” (goodbye) and headed downhill towards our final rest stop of the afternoon.

We’d read stories about the trains in Myanmar being a bit of a nightmare, arriving up to 10 hours after the ETA and frequently derailing and I fully understand this after walking along one of the tracks! The ground was quite boggy so you had to walk on the sleepers and it was a total lottery as to whether it would remain in the same place once you’d put weight on it. Anyway, we avoided getting wet or hit by one of the 2 daily trains and after a short break we navigated (were told where to go by Chi Ou) through rice paddies and garlic plantations until we got to our final stop and bed for the evening in a Danu tribe village.

After a long hot shower and logging on to the wifi we woke from that dream and were shown around our accommodation, then were shown where the toilet was as this was not connected to the house, then were shown where the shower was because this also was not connected to the house, neither was the kitchen. Finally, we were advised not to leave our shoes at the bottom of the stairs as the dog had a habit of hiding the in the fields in the middle of the night! None of this mattered as Xavier had been to the shop and had bought all 8 of their room temperature beers and we were full of crisps and curry! After we ate, the owner of the house sat with us and shared some local whiskey. It was pretty powerful stuff but with a squeeze of lime it warmed you through. He showed us photos of his wife on their wedding day, more recent photos children and grandchildren. He asked where we were all from and we guessed each others ages. It was really nice to converse with our host through Chi Ou who acted as our translator. After our final beers and local moonshine we passed on watching a film (the only electricity in the house was from a car battery charged by a solar panel) and called it a night at around 8:30!

Day 2
The second day started around 2am with “operation rice clean up”. Katy hadn’t been well in the night and asked me to cover her tracks.

Nobody wanted to remove their covers from their heads, I’d put a hoody on in the middle of the night as it was freezing! We refuelled on fruit, eggs and pancakes ready for the steep climb, and steep it was but we were rewarded with amazing views of a valley of rice paddies. The descent into the next valley was much gentler through chilli plantations being harvested and dried in the scorching sun. Day 1 felt like we were walking though damp muddy farmland, today was like walking through a red desert. It felt like we’d done the same amount of miles this morning than we had the whole previous day. The town Chi Ou told us we were having lunch in seemed like a mirage on the horizon made no better by the fact that it could well have been the worlds longest town. The curry, chips and avocado salad was maybe one of the most deserved lunches I’ve ever had!

After lunch Chi Ou asked if we’d like to try some betel leaf (Paan), the leaf many people chew on which turns their mouths red. I gave it a go and can safely say, it’s not for me. Good news was that my legs were now working again and Chi Ou assured us it would be “pancake terrain”, turns out he meant Burmese pancake because it turned out to be very “undulating”. The rice paddies soon turned into bamboo forests and we were climbing again. Tonight’s village was slightly bigger, it had 2 shops, one of which had cold beer. After today, a bottle of this was well earned! Dinner tonight consisted of pumpkin curry, ginger salad and French fries (cooked with fish sauce) which actually turned out to be pretty amazing! Again, it felt like our hosts were going all out to make us feel welcome. This evenings sleep was less eventful than the previous, but still as cold!

Day 3
Everyone seemed to wake as breakfast was being served, more eggs, fruit and pancakes this morning to fuel us to the end. The amount and range of different foods gave you a sense that the hosts were showing off their cuisine and local produce. The effort that all of our hosts had been to was greatly appreciated.

The sun was definitely shining, but the village was engulfed with a thick mist which made the first half hour of the trek quite eerie.

As the mist started to clear the relentless heat began. It was as if Chi Ou was navigating us around every bit of shade possible! We all knew that the hike today was not as a long and was “downhill” to the Inle Lake. Again, not entirely true because there were some more fairly steep climbs. We tried to keep rest stops short so that we could get to our lunch (and finish line) as soon as possible! Conversation soon turned to things that we were missing. All the others in our group would be returning home after their time in Myanmar (we wouldn’t for another 5 months) so their “wine and cheese” seemed more achievable than our “wine, cheese and a tuna mayo baguette”. After a short, steep descent we were at the check point to pay our entrance fee and across the road was our final lunch stop. Walking boots off and weary, we all appreciated our final avocado salad and chips, ginger salad and tea leaf salad.

So we thought there would be no more walking… The walk to the long boat felt like it went on forever! Once onboard we could finally put our feet up and enjoy the breeze as we entered the lake via the floating gardens and began the hour long crossing to Nyaungshwe.

According to Fitbit the total distance of the trek was 105544 steps (roughly 43 miles) climbing 398 floors (3980 feet). It was described as “moderate” in difficulty, probably because of the total distances? Although the terrain could be much more difficult during wet season.

It was advertised as a cultural trek rather than scenic. It was no Yosemite, but there were some beautiful view points along the way. It was fascinating to have such a knowledgeable guide who could teach us about the local way of life, from the price of ginger (400k/kg) to giving us a commentary on the selling of a cow. I would definitely recommend the homestay element to make your tour more authentic. The accommodation, food and way of life had not been “westernised”, it didn’t feel like walking round a safari park pointing at exhibits and reading the little plaque. It felt more like being in a travel documentary.

We also learnt from Chi Ou that, according to Buddhist beliefs, people born on specific days of the week are astrologically matched. Apparently Wednesday morning (me) and Saturday (Katy) is the best match.

This trek was my absolute highlight of Myanmar. Not only our guides and hosts, but the whole population have been incredibly welcoming.

We trekked with Sam’s Family Trekking