Kampot; Cambodia – our stay at Mad Monkey Hostel and what we did in Kampot 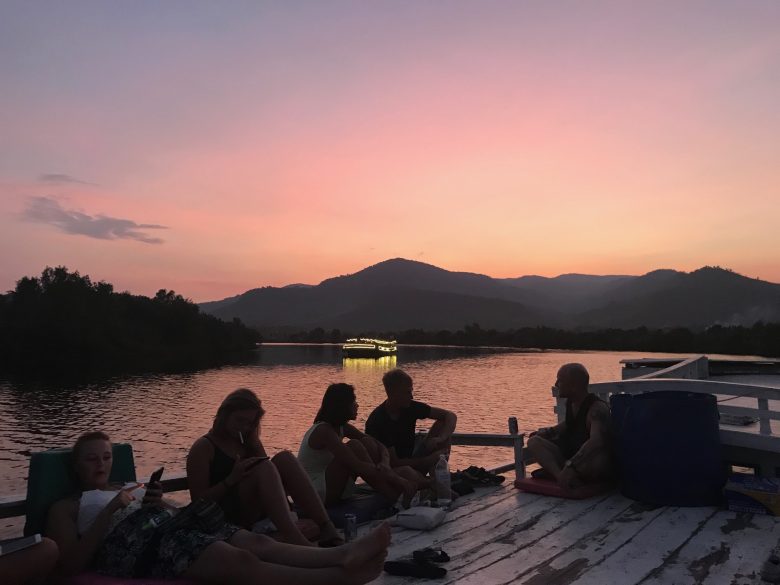 We stayed in Kampot for 4 nights at the very end of our Cambodian adventure. We wanted to arrange our Vietnamese visa here and then travel overland to Can Tho via the Ha Tien border crossing roughly 1.5hours drive south of Kampot.

We had planned to meet up with my friend Sammy, here who is also travelling South East Asia, but in the opposite direction to us! Sammy is 25, single and super sociable and had booked to stay the Mad Monkey Hostel in Kampot, so we followed suit, especially as we also heard that this hostel arranged visas for Vietnam quickly and effectively.

We had booked a double room at Mad Monkey hostel and it was really spacious, clean and with a great ensuite bathroom and balcony. Our first night at Mad Monkey was spent deliberating if we had made a really bad decision about staying at a ‘party hostel’ when in our early 30’s and not party animals, especially when we realised the bar was full of 18-22 year olds! But nevertheless we stuck it out, with Sammy, and we found some people our age to hang out with and planned to do the ‘beach visit to Kep’ the next day with them, which was organised by the hostel.

The food here was great, if overpriced from what we were used to, but a real treat: every morning I had smashed avocado and poached eggs on toast and a delicious iced coffee. It set us back $6 per person, but our stay here in Kampot, felt like a holiday within a holiday! We also ate salads, sandwiches MAC AND CHEESE! and… chips cheese and gravy, or ‘poutine’ if you’re not from the north of England!

The ‘beach day to Kep’ began at midday when the 20 – or so people who had signed up all piled in the back of a motorbike drawn trailer full of cold beer and some speakers. At first it felt like my worse nightmare had come true! Loads of people chatting about where they’re going to university in September and when they last ‘vommed’. After a few beers though, we fitted right in and all was fine. There were a few slightly older people we gravitated to (I don’t actually know their age, but they were more mature), and one of the guys that works in the hostel was in his 30’s and was a yoga teacher! We all ate squid, fish and shrimp together, then headed to the beach. Kep beach isn’t idyllic with white sand and blue water, but it was a cool place to hang out and drink more beer!

After what seemed like 2 hours, but was actually 5 hours (time flies when having fun!) we all headed back to the hostel, all now very loose and chatty. Everyone dived into the pool then we gradually headed to our rooms to change ready for the evening. Myself and Sammy both said we don’t really remember showering, but Mark did not even make it back downstairs! Sammy and I went to the bar with our new friends until it closed around midnight. It turned out to be a lovely night, for me. Mark not so much!

The next day we spent ‘chilling’ (hungover), but I managed to get some admin done. We had a light lunch of sandwich/ salad and then in the early evening, the 3 of us went to a riverside floating restaurant for dinner and a sunset view, which was beautiful…

Day 3 was action packed- the 3 of us went on the ‘Kampot tour’ organised by the hostel, but also by anywhere in town- it should cost roughly $20-$28 for the tuk tuk depending on the number of people. We visited the nearby cave with elephant stalactites which they now worship, a pepper farm (which included a free short tour and we were able to try one pepper corn of the colour we liked!), ‘the secret lake’, the salt fields and ended in Kep again, where we visited the crab market whilst our driver waited for us. We shared 3 crabs cooked with green pepper and also had a BBQ cuttlefish.

Back at the hostel we booked our bus to Can Tho for the following day, got our visas back after a swift 2- day turn around, then changed and headed out on the $5 sunset cruise, also organised by Mad Monkey Hostel (yes we did lots of things they offered, but there were many more we didn’t do, such as the Bokor Hill Station motorbike trip, or the booze cruise). There were around 10 of us on the boat and Darren the yogi/ Mad Monkey worker assured us it wasn’t a booze cruise. It was actually one of the nicest evenings in Cambodia; we cruised along with a few beers listening to chill out tunes, observing the river once out of the town. We anchored down and there was the option to paddle board or kayak if anybody wanted to. The sunset was beautiful – orange then pink, and it was a full moon too. On the way back to town we saw hundreds and hundreds of fireflies lighting up the sky (it’s pretty much impossible to photograph fireflies – so sorry; no pics). It was a lovely way to spend our last night in Cambodia.

Although we were nervous and a little judgemental about Mad Monkey and the clientele it attracts, our trepidation was unfounded, and we had a great time here. It helped that Sammy is sociable and outgoing, and it encouraged us to do things that were out of our comfort zone. Like everywhere, there are always some travellers you will have nothing in common with, but the large communal spaces made it easy to totally have your own space if desired. The guys Darren and Sandy that worked there always came around offering a booze cruise, or bike tour, or beach day etc, but they were excellent, in that you never felt any pressure to do those things or to drink. It was, very responsibly run, and allowed travellers to feel at ease with themselves and their decisions and plans. In a way, we were a little sad that it was our last stop in Cambodia, as we would have considered the Mad Monkey chain for other places such as Siam Reap and Phnom Penh, had we known how good they were.