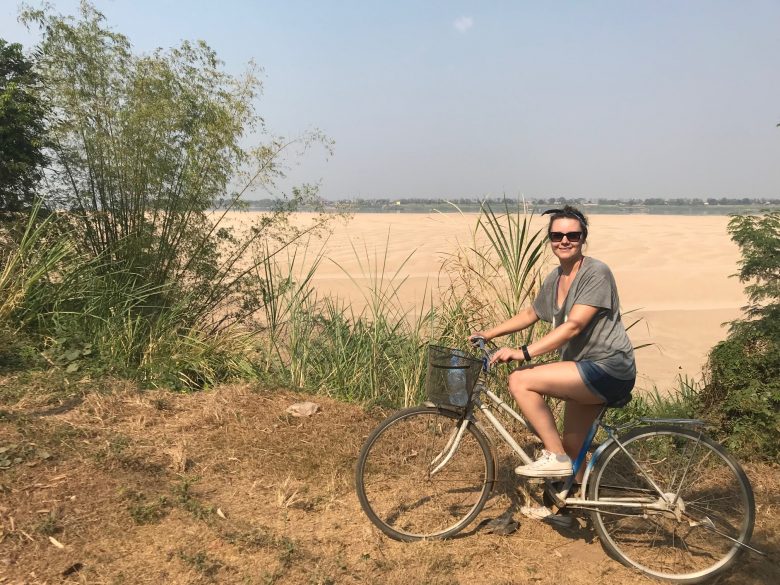 The first reason is our previous blog post – “Kratie – Kayaking, Dolphins and why it shouldn’t be missed” – it really was a great day – so please read and go do for yourself!

From our guesthouse on the river front road in Kratie, you can look out onto the Mekong and a large island with sandy beaches, where a ferry goes to and from constantly throughout the day: this island is Koh Trong.

For £0.25 per person, you board the ferry and stand on the deck for around five minutes whilst it crosses to the other side. The ramp is let down and everyone jumps off into the Mekong up to their knees and walks to the beach. A ten minute (though it felt longer in the 39C heat) walk, on a wooden boardwalk/ path leads you off the beach and onto the island proper. This would take much less time in wet season (May- November) as the Mekong changes by 15 metres between wet and dry season! That is just a phenomenal amount of water!

There’s a small hut displaying a map of the island, homestays that are on offer here, a handful of market stalls and some parked bicycles. We had a look at the bikes – basic, old, single- gear bikes, but all appeared in good working order and we chose the ones with some form of brakes. The lady said some were $2 and some were $1 so we asked for the $1 ones and couldn’t really tell the difference other than the shape of the handle bars. Anyhow, we set off on the 9km flat loop around the island anti clockwise (people were going both ways).

We bimbled along; it was 39C. The first stretch (the eastern side of the island) was a concreted path, wide enough, just, for two bikes to pass, and this first section was fairly busy with locals on motorbikes. Little breaks in the bushes on the east allowed glimpses of vast white sandy beach and you felt you were on a desert island rather than a land mass in the middle of the Mekong river! We passed grazing Oxon, locals going about their day and many different fruit trees – pomelo, banana and of course coconut. 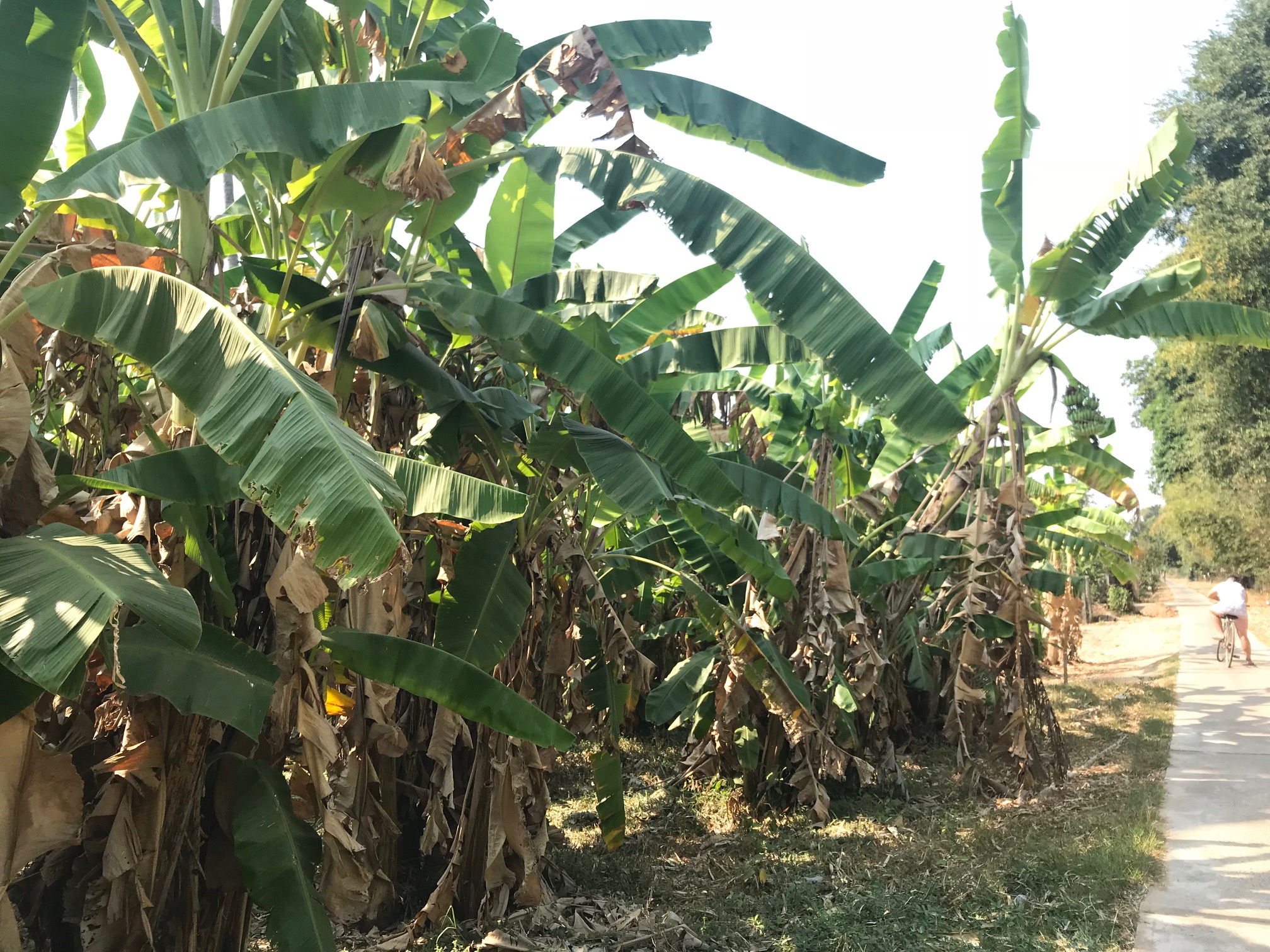 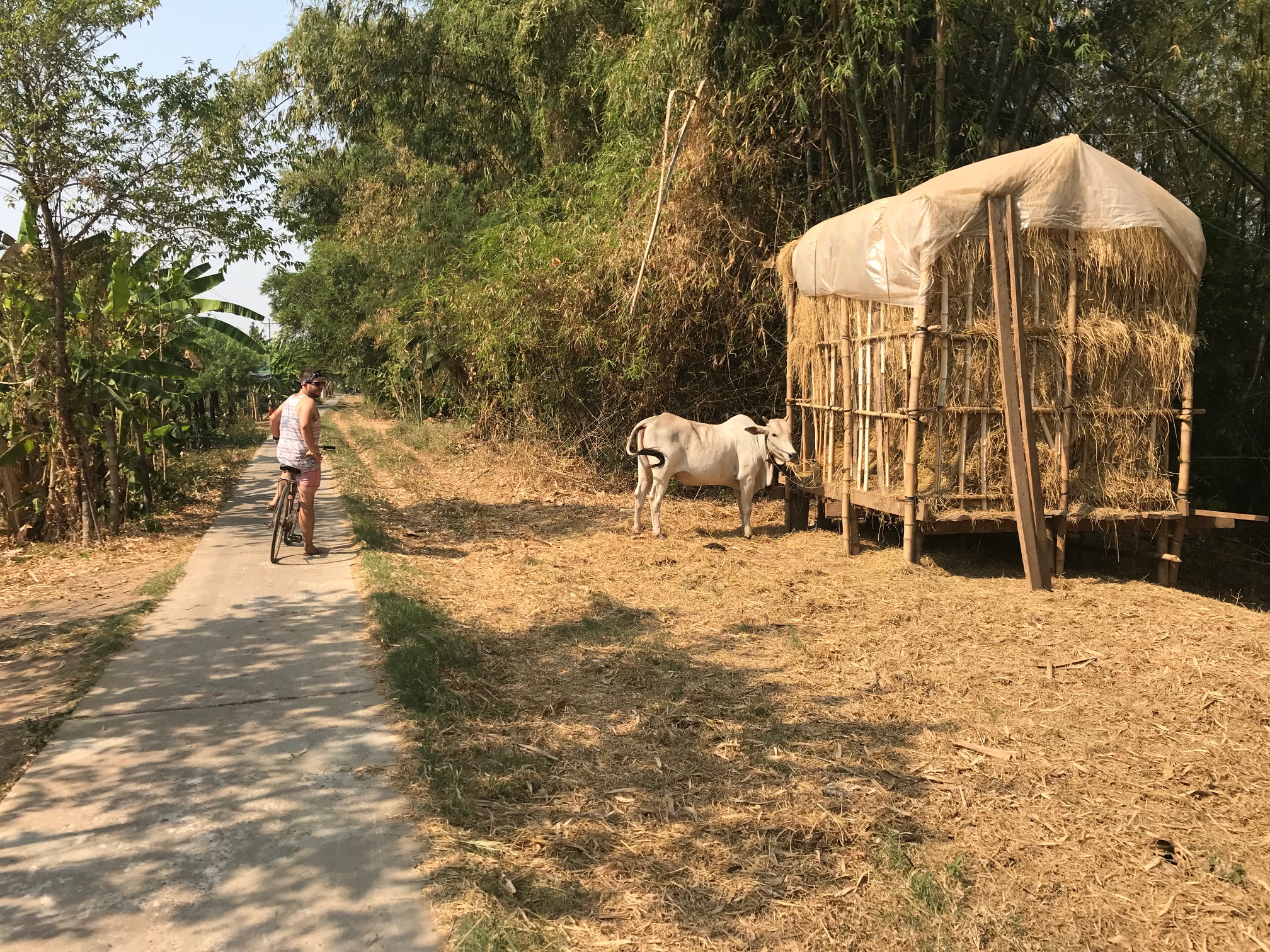 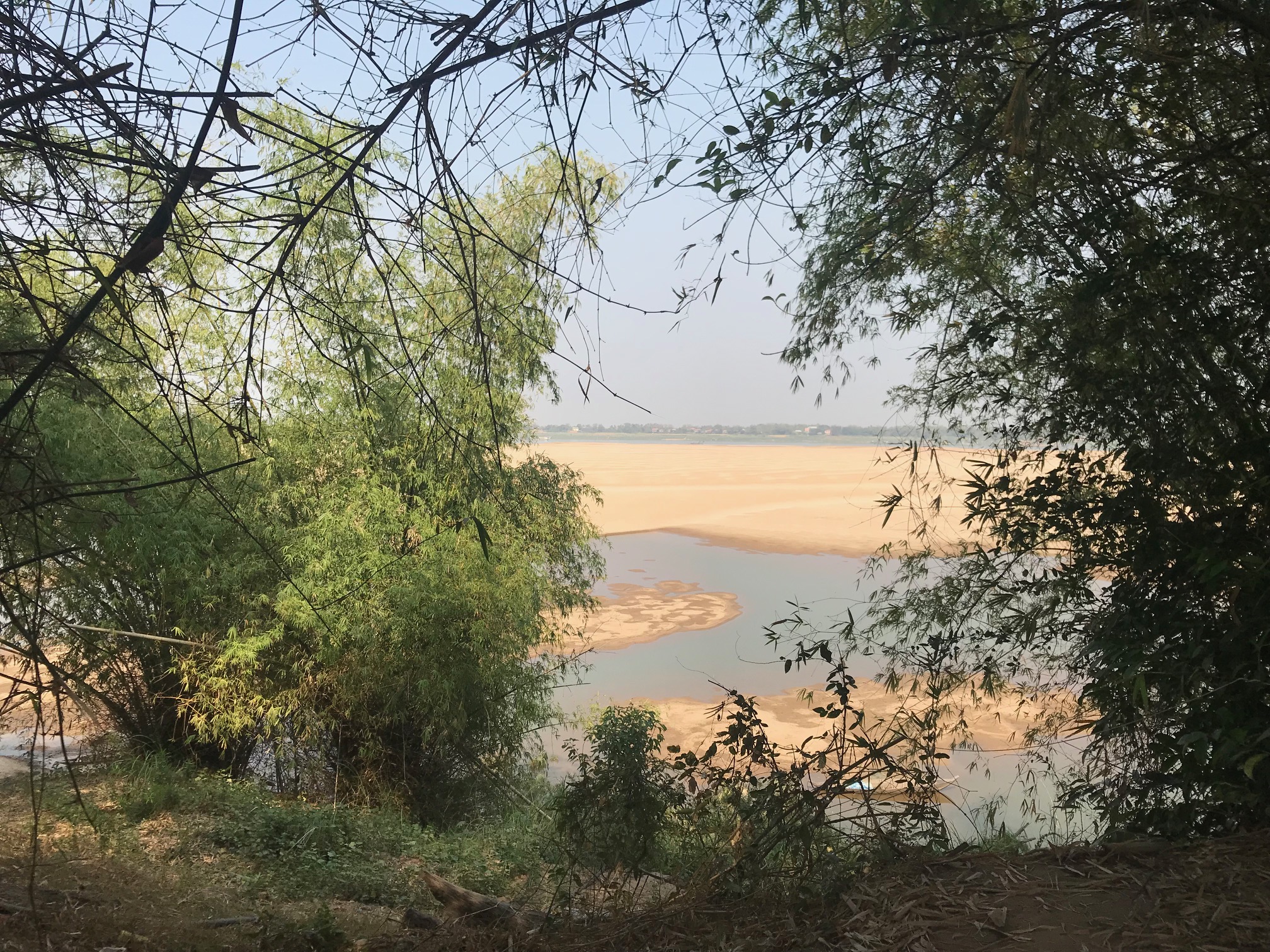 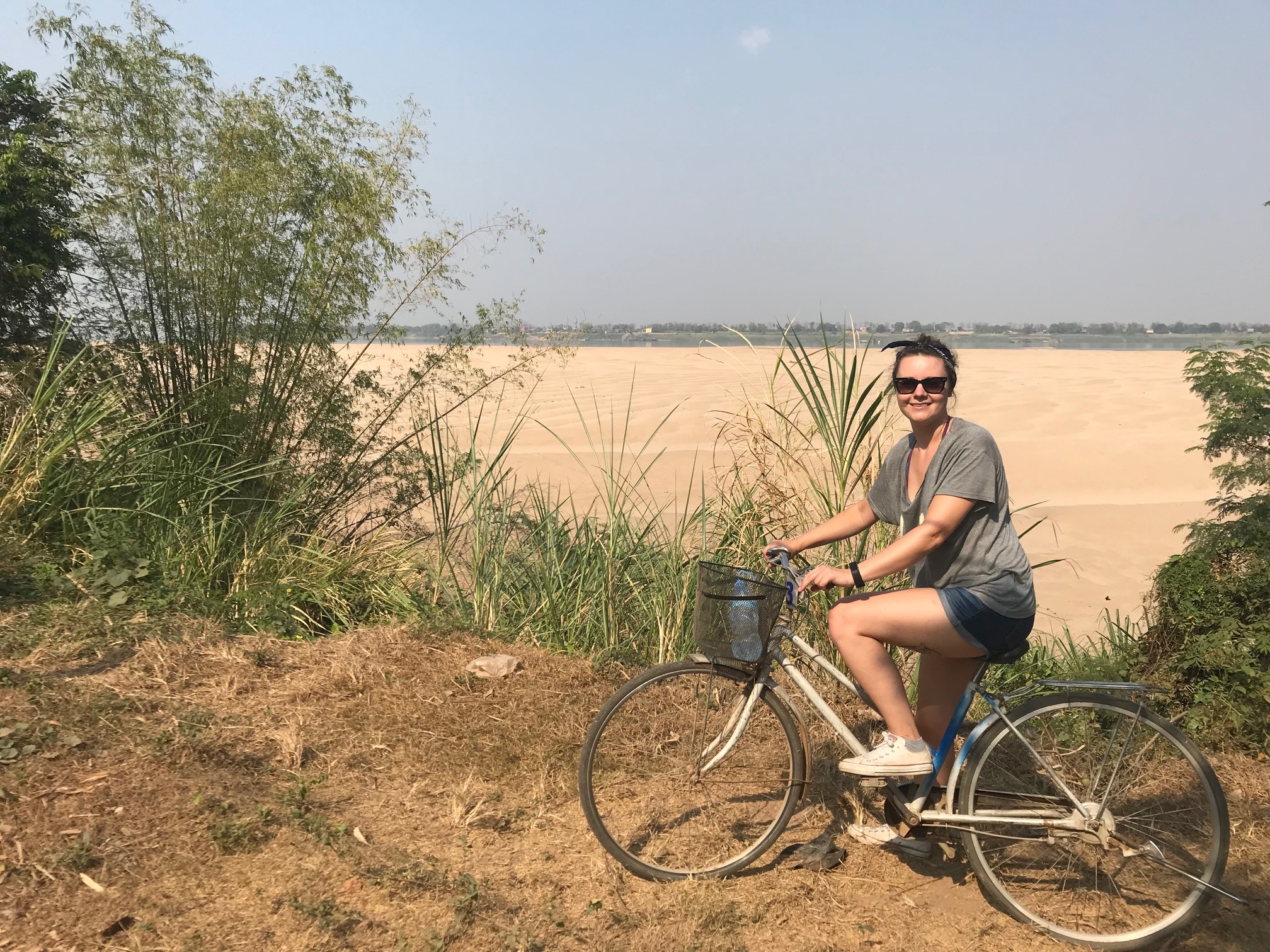 Along the north side, the path became dirt track rather than concrete and for the first time we glimpsed the inner part of the island – farming; rice paddies mainly (which were harvested and dry at this time of year) and some vegetables; lots of tomatoes in particular.

At the north west part of the island there were cute little hand-written signs for a view point and a beach, so we parked up and followed them. Both didn’t disappoint, although it was much too hot to sit or even walk on the beach in the blazing sun, but we found a shaded spot to admire the view. 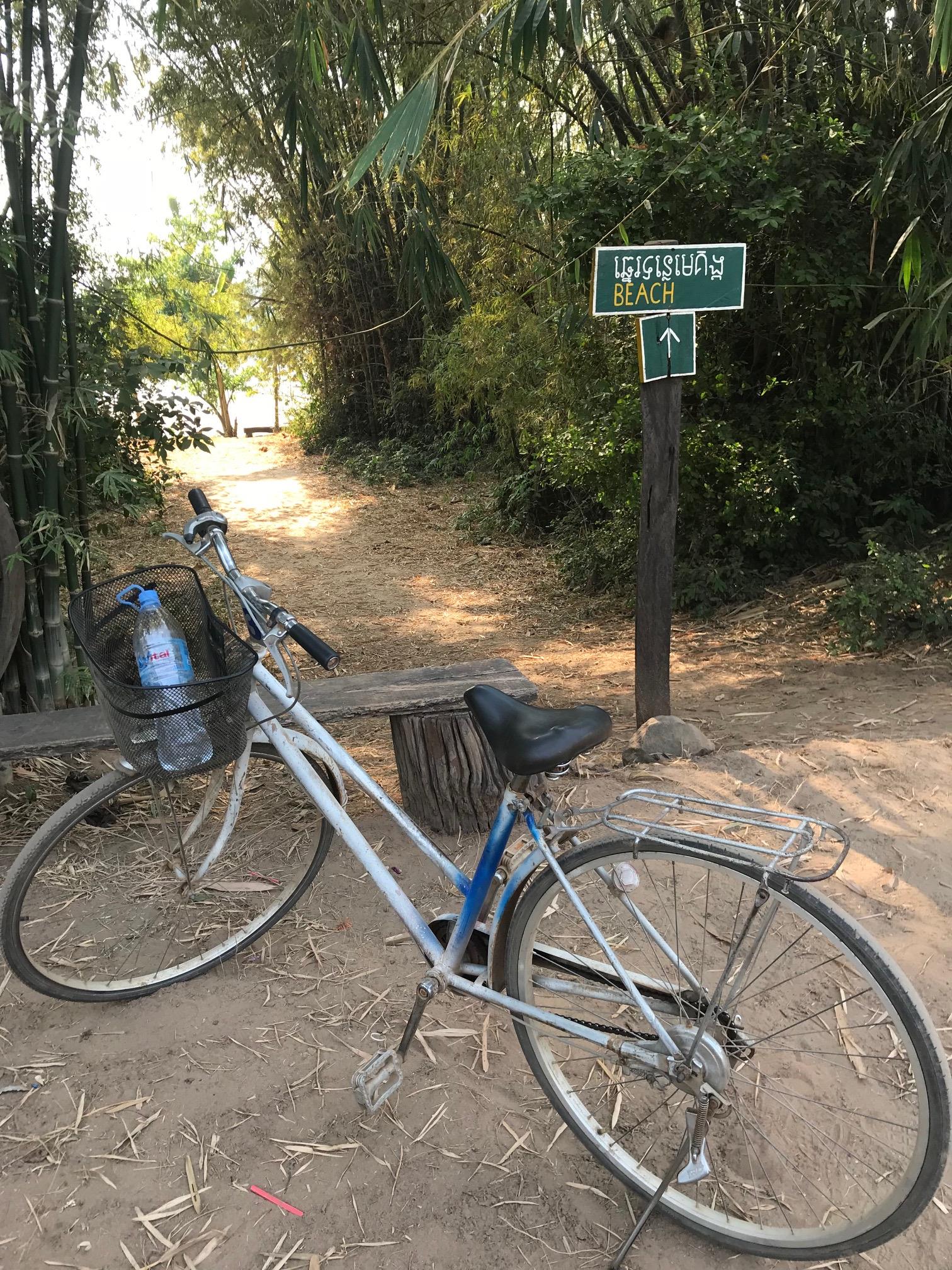 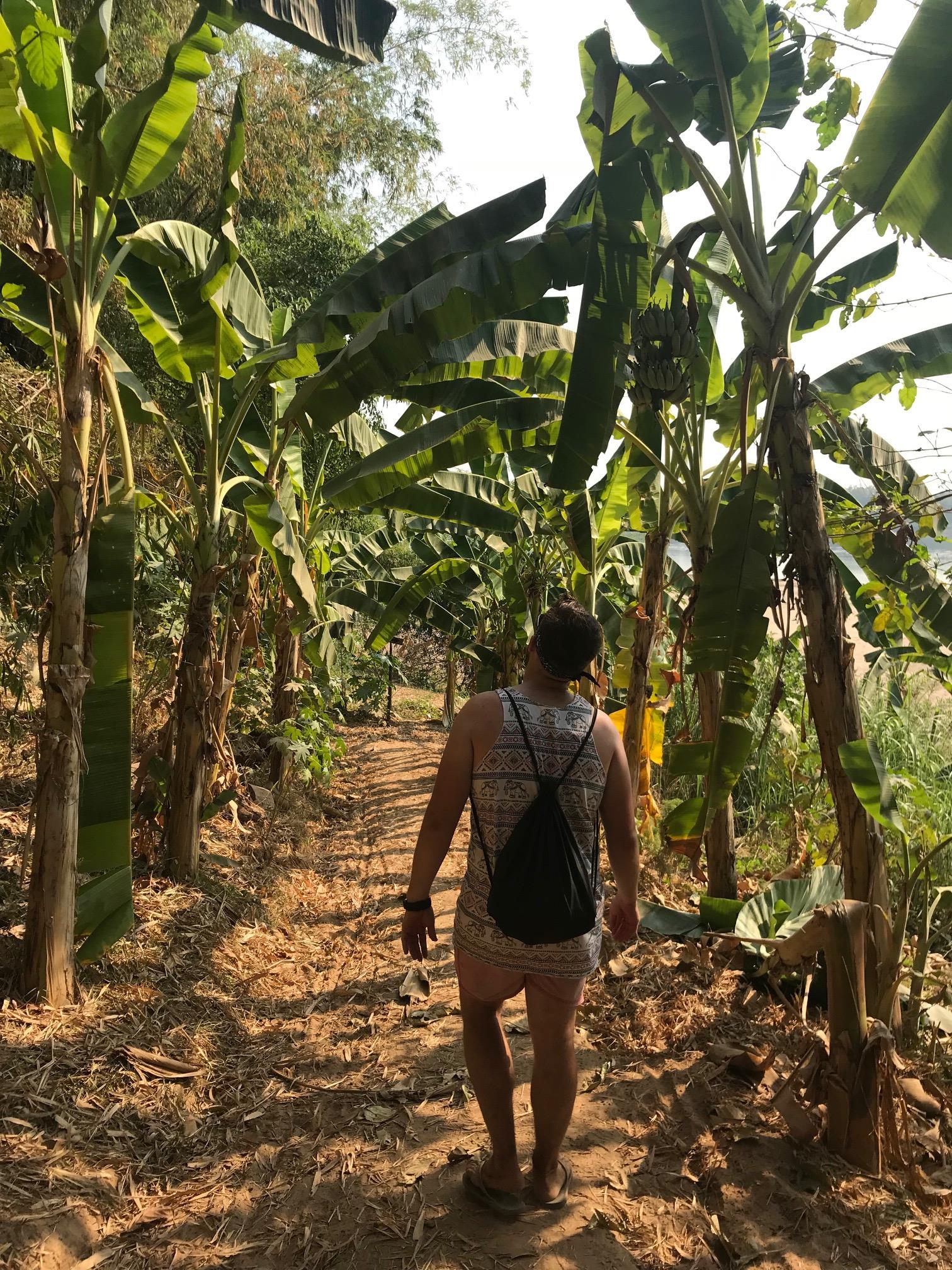 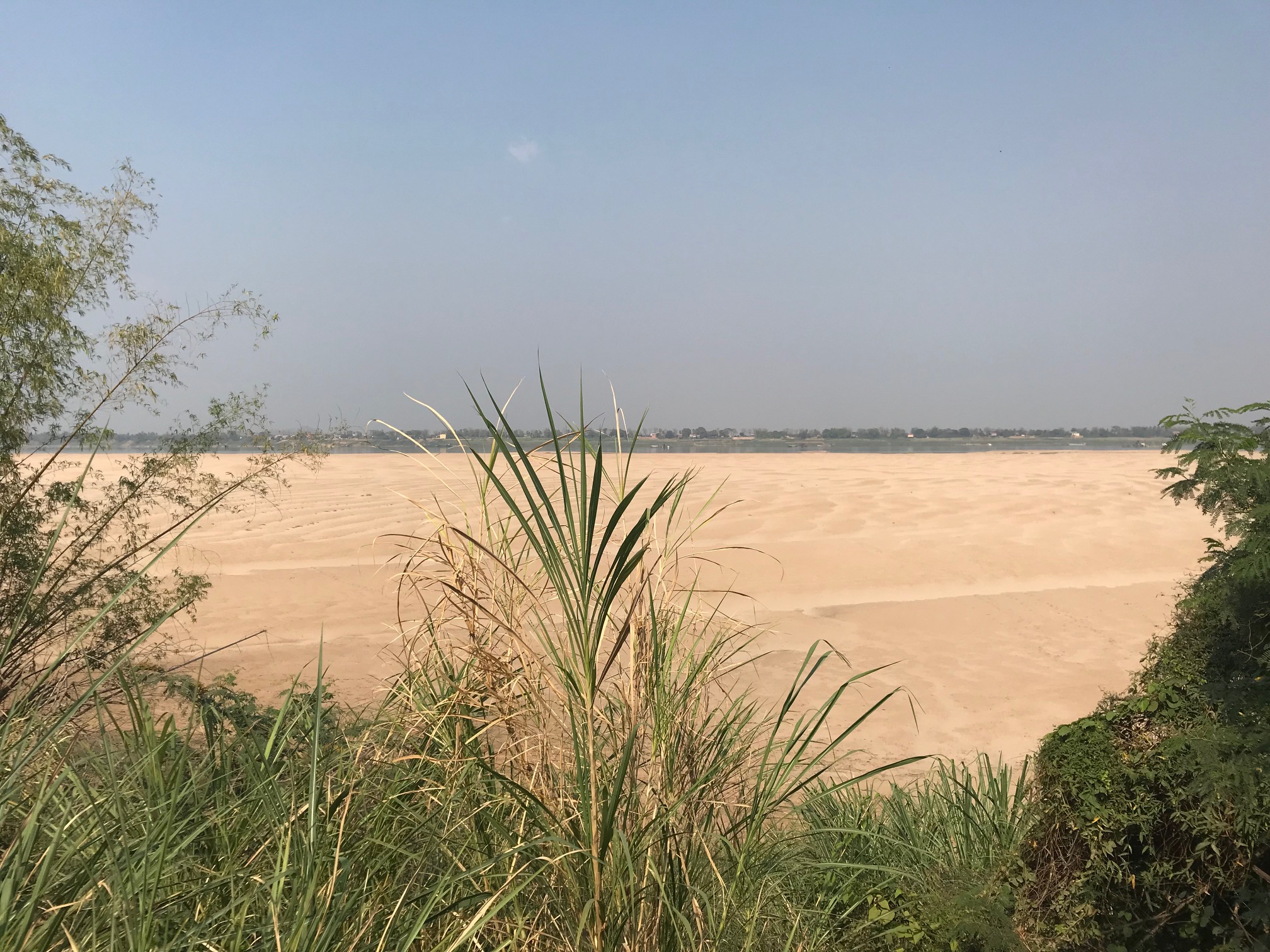 Back on the bikes, the western side of the island seemed prettier and less built up. The path remained a dusty track. Many more locals were relaxing and hanging out in groups with children playing and everyone we passed said “hello” and children waved. We came across the Koh Trong Café and shared a fresh coconut – it wasn’t cold but even so, the sweet liquid was very welcomed!

At the south west aspect, we passed locals harvesting plump tomatoes and to the west just off the shore was a floating village. We stood and watched people fishing from their floating platforms, and children playing- on the platforms then jumping into the Mekong as well. So fascinating that life can occur as normally floating on a river as on land.

The south path was concreted again and passed through the farmland. We think this would have been beautiful in the wet season when everything would be green and lush and the rice paddies picturesque. 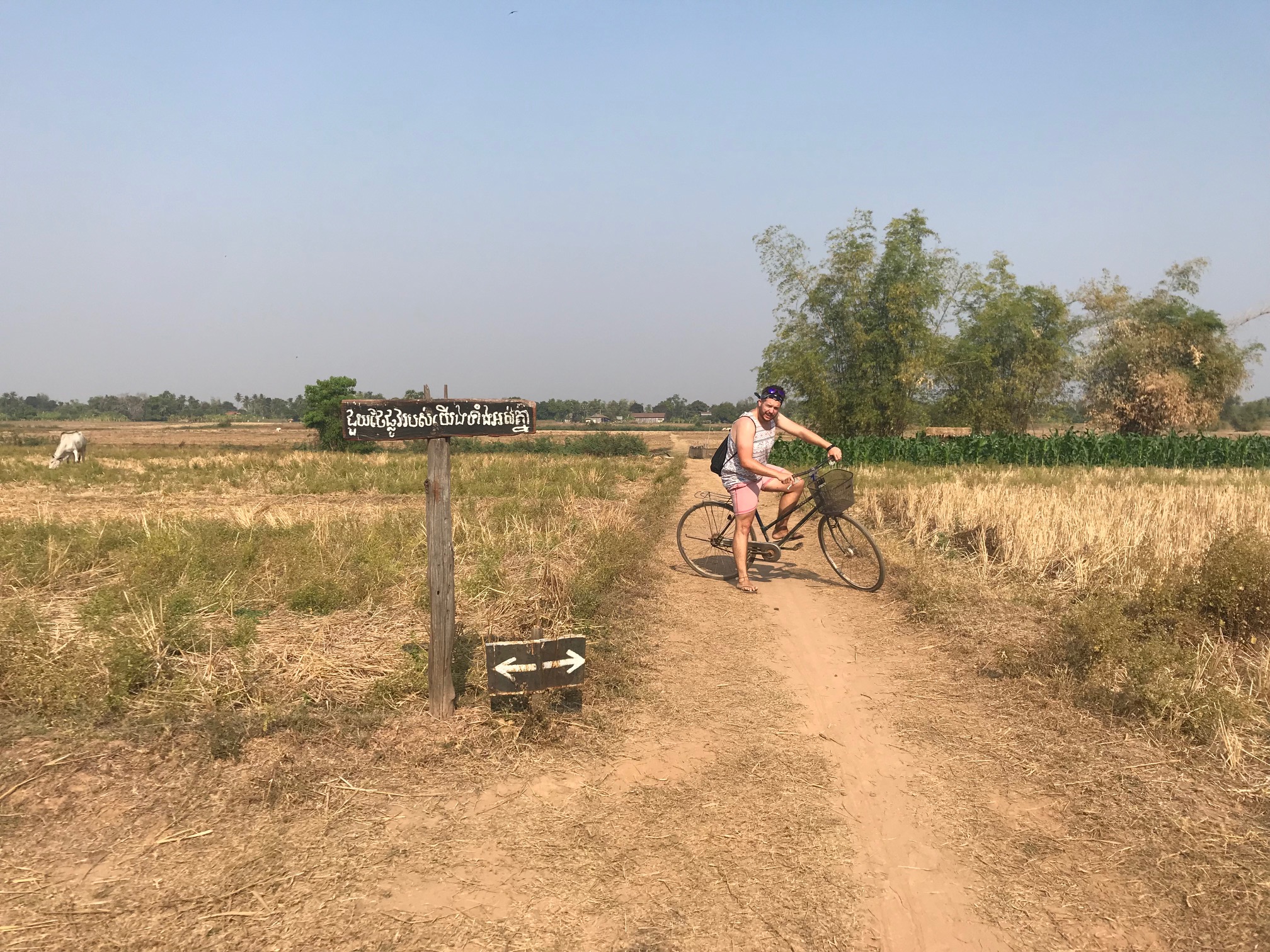 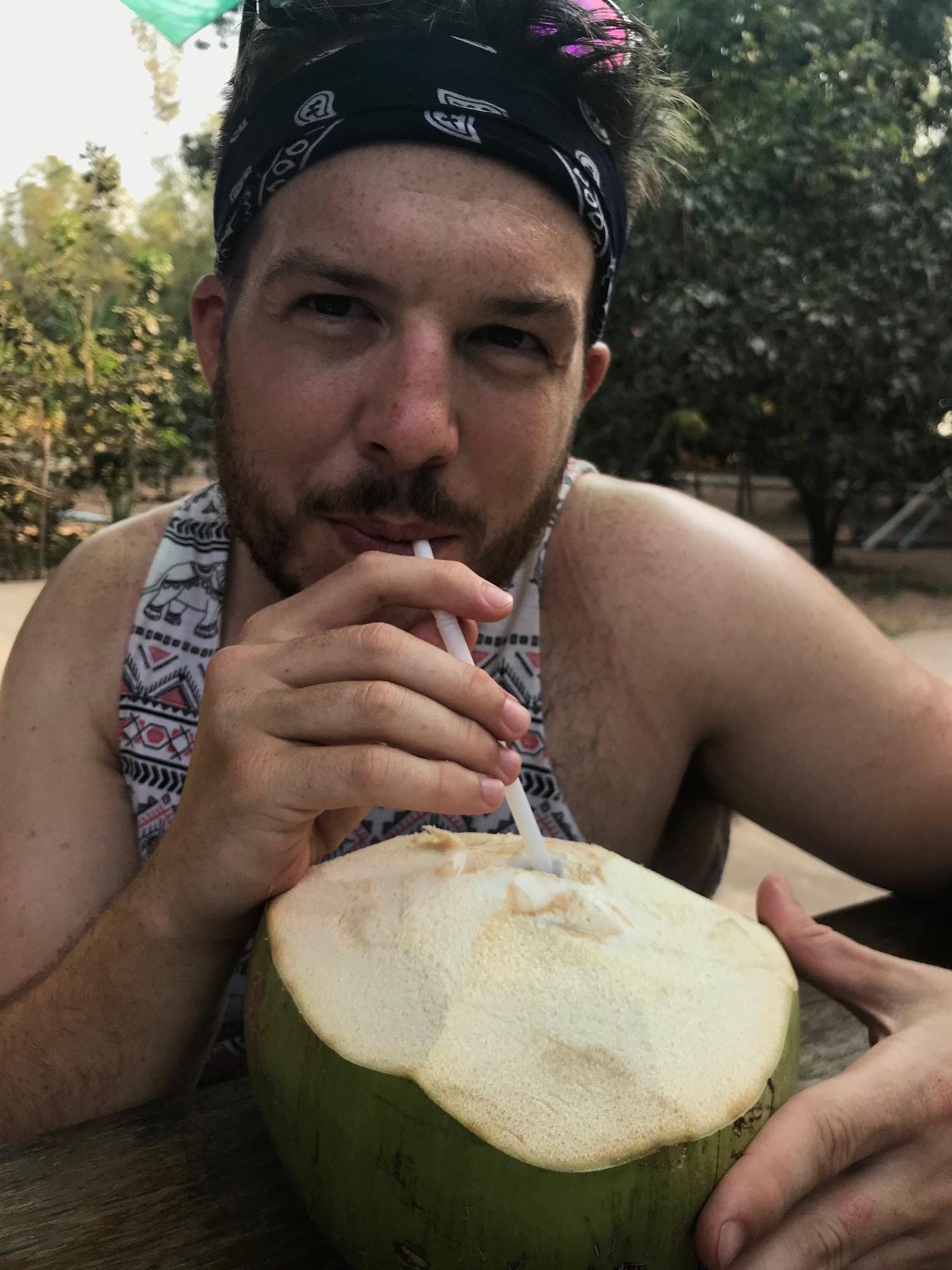 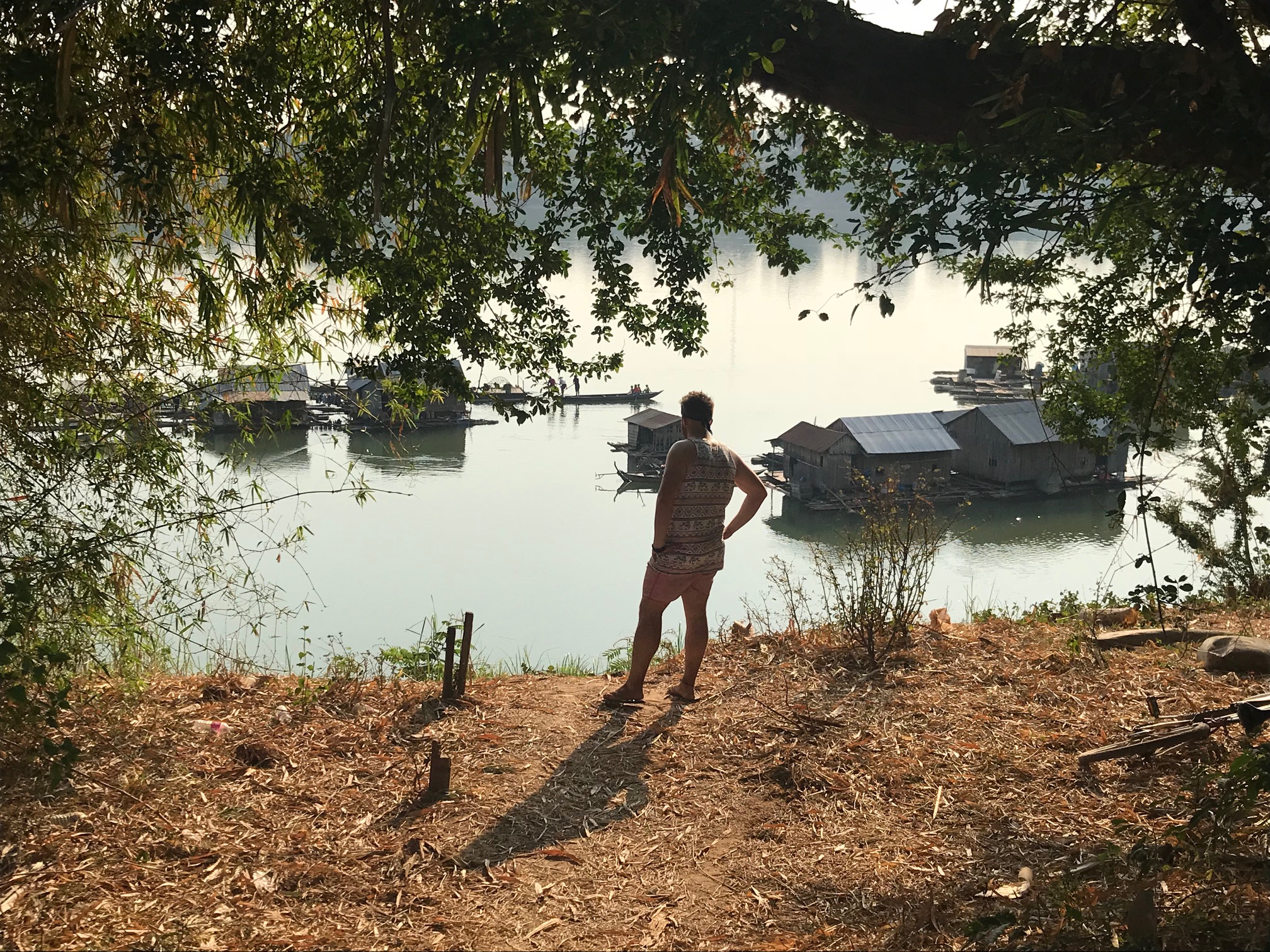 After returning out bikes, we arrived ready to board the ferry about 3 hours after we had arrived on the island. The afternoon sun was casting beautiful light onto the island, so after we reached Kratie, we bought a few cans of ice cold beer and just sat on a river side wall overlooking Koh Trong, for an hour until the sunset! It was a lovely end to a very relaxing day. 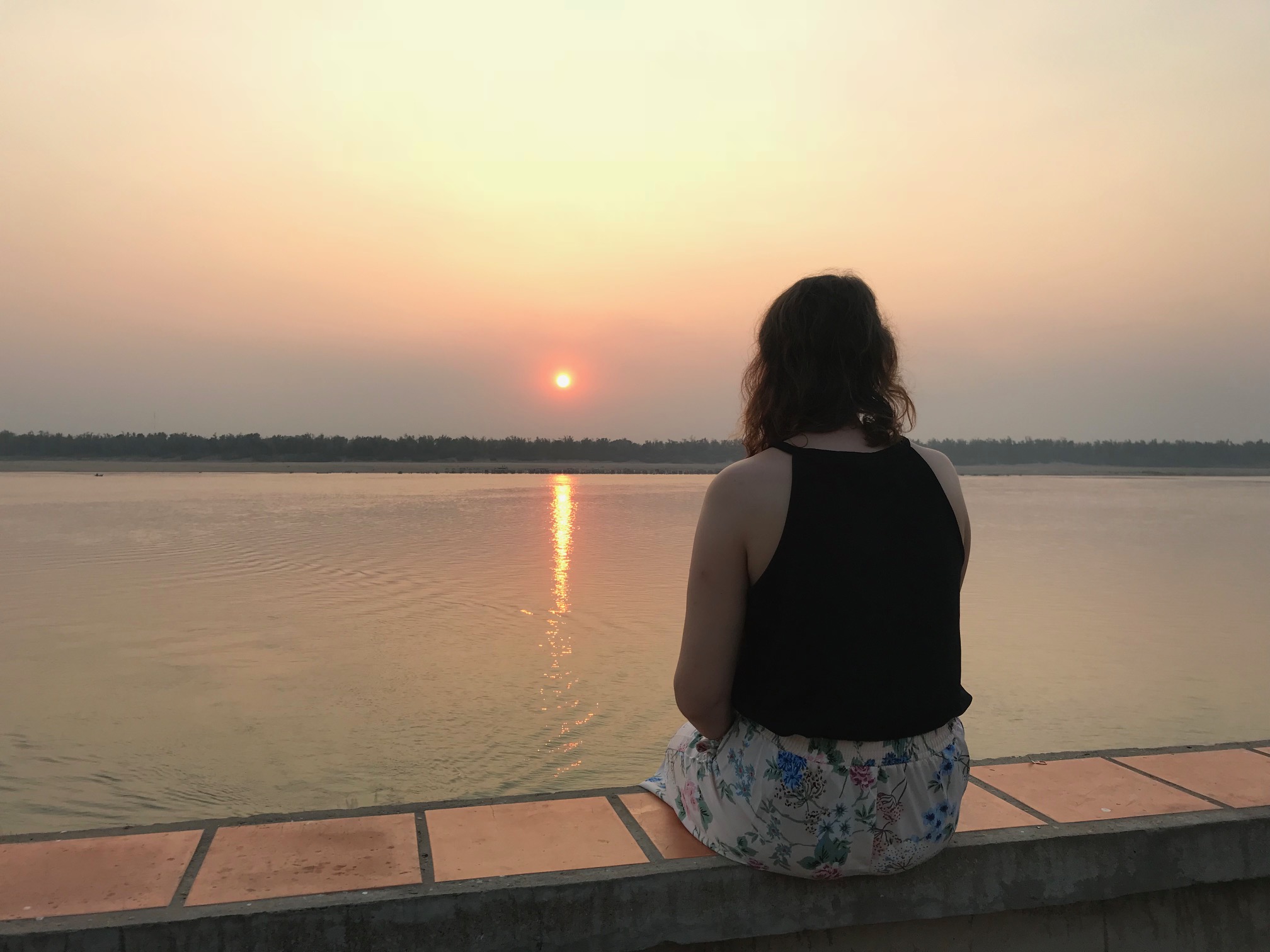 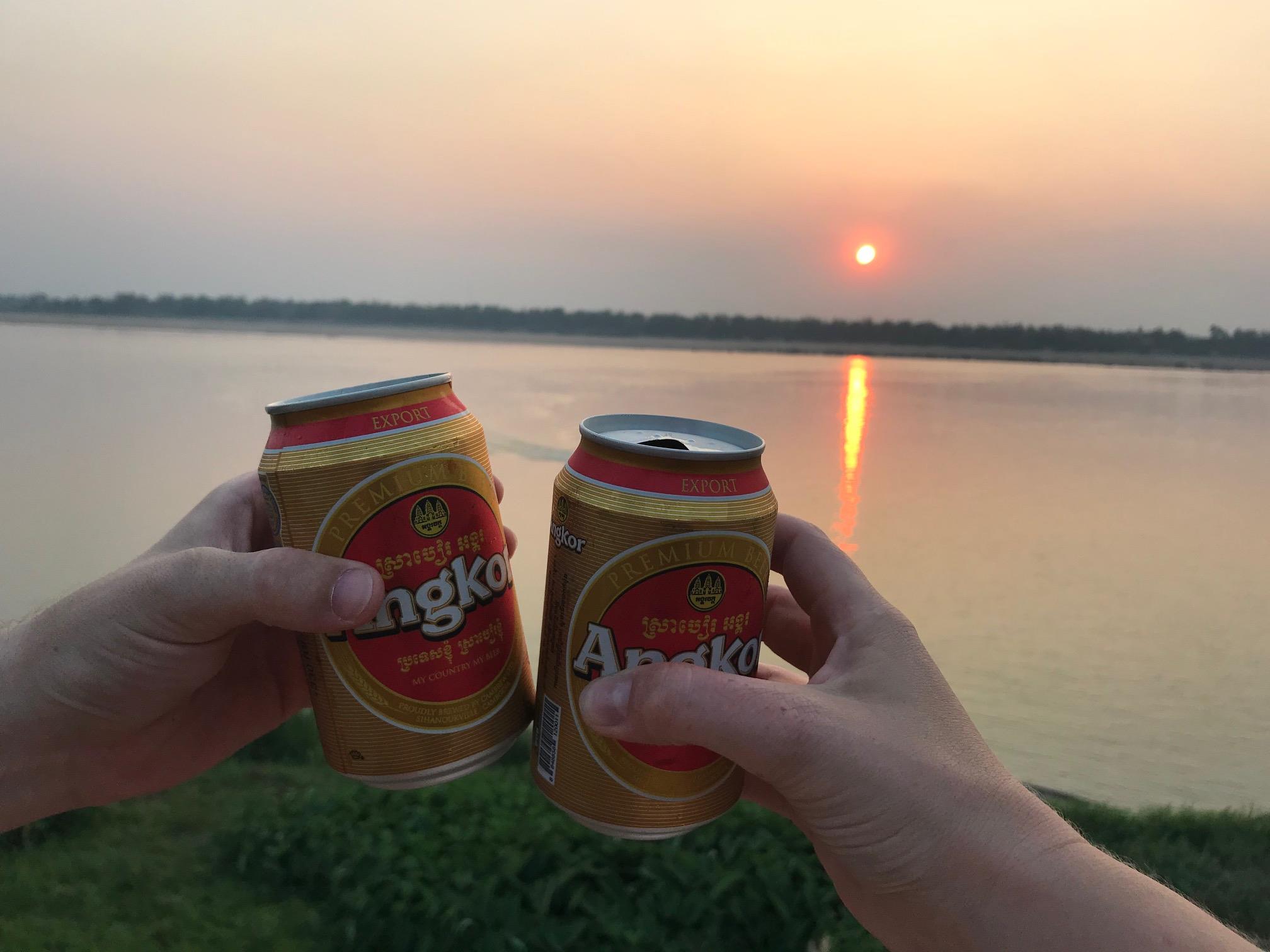 If in Kratie, definitely spend half a day on Koh Trong – hell, why not head over in an afternoon and do a homestay there as well! We would have considered that had we not got early morning plans the next day for onward travel.

Kratie was a great place to stop for a couple of days – we had just under 2 full days (we arrived mid-late morning) here and really enjoyed it, although for us that was enough time. Our absolute highlight, and one of our best places so far in all of Cambodia, was kayaking with Sorya Kayaking Adventures and Café, along the Mekong through flooded forests and seeing around 8-10 critically endangered Irrawaddy Dolphin – see our next blog post http://www.appetite-for-travel.co.uk/2018/02/27/kratie-kayaking-dolphins/