Kratie – Kayaking, Dolphins and why it shouldn’t be missed 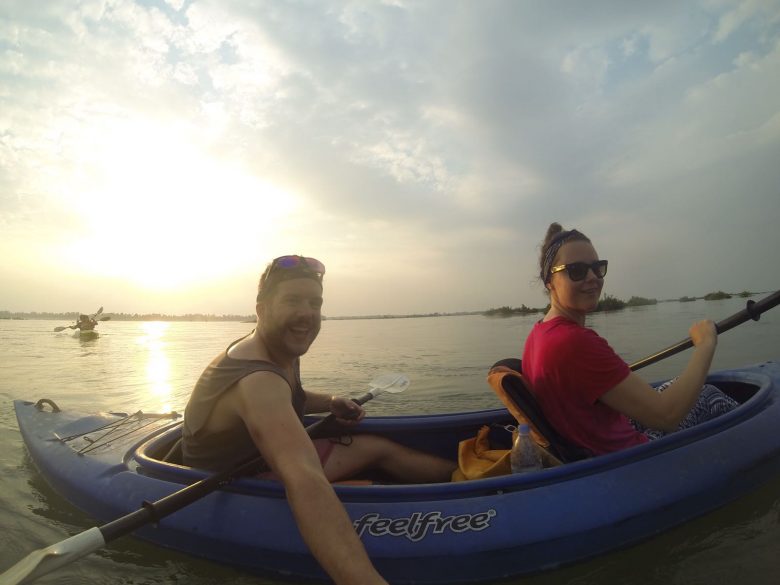 Cambodia has a lot to offer; ancient temple ruins, interesting history and buildings in Phnom Penh, beautiful beaches and islands, but a lot of people miss out the beautiful yet troubled far east (see our post on Mondulkiri Province) and the Mekong region; including Kratie!

Kratie (pronounced ‘Kra- Chi’ by the way) is a small town sat on the eastern bank of the Mekong river. From here it takes around 3 hours to reach the Laos border, and around 4 hours to Phnom Penh, so it makes it an ideal stop over if going between the two. We came from Siam Reap though, and the transport connections are great.

We spent one afternoon here cycling around the bucolic little island of Koh Trong, and on our second day, we spent Kayaking on the Mekong with Sorya Kayaking Adventures and Café and I cannot recommend this highly enough! Read on and I will try and portray why it was so worth going to Kratie for.

We booked the day before; but online booking is available, and I would recommend this is high season. They do a morning and an afternoon trip, and due to availability, we did the afternoon one, and were so glad we did. The cost varies depending on numbers; we had a full group of 9, plus 2 guides, so it cost $24 per person.

We arrived around midday and were given the choice of tea or coffee and some delicious freshly made pumpkin bread from their café. We all sat getting to know each other, had a briefing; about the trip and about safety from Pete, the owner/manager and then set off in the back of the truck to the start point around 20km north of Kratie.

Mark and I were put in a tandem kayak, single travellers had the option to pair up or go in with a guide, and the two girls on their own decided to go with guides and were happy they did as it meant they didn’t have to work so hard with the paddling and could take in the scenery even more than us!

The first task was to kayak across the Mekong to a marker in the river, which was arduous work going against the current, staying straight rather than floating downstream. After 20 minutes, we reached the marker then all held each other’s kayaks and chatted and floated together as a raft whilst the guides discussed life on the Mekong and the next step of the adventure. Mark and I agreed we would probably never kayak together again, as the first leg had consisted of hitting each other’s paddles, veering off course and me giving up altogether for a while! 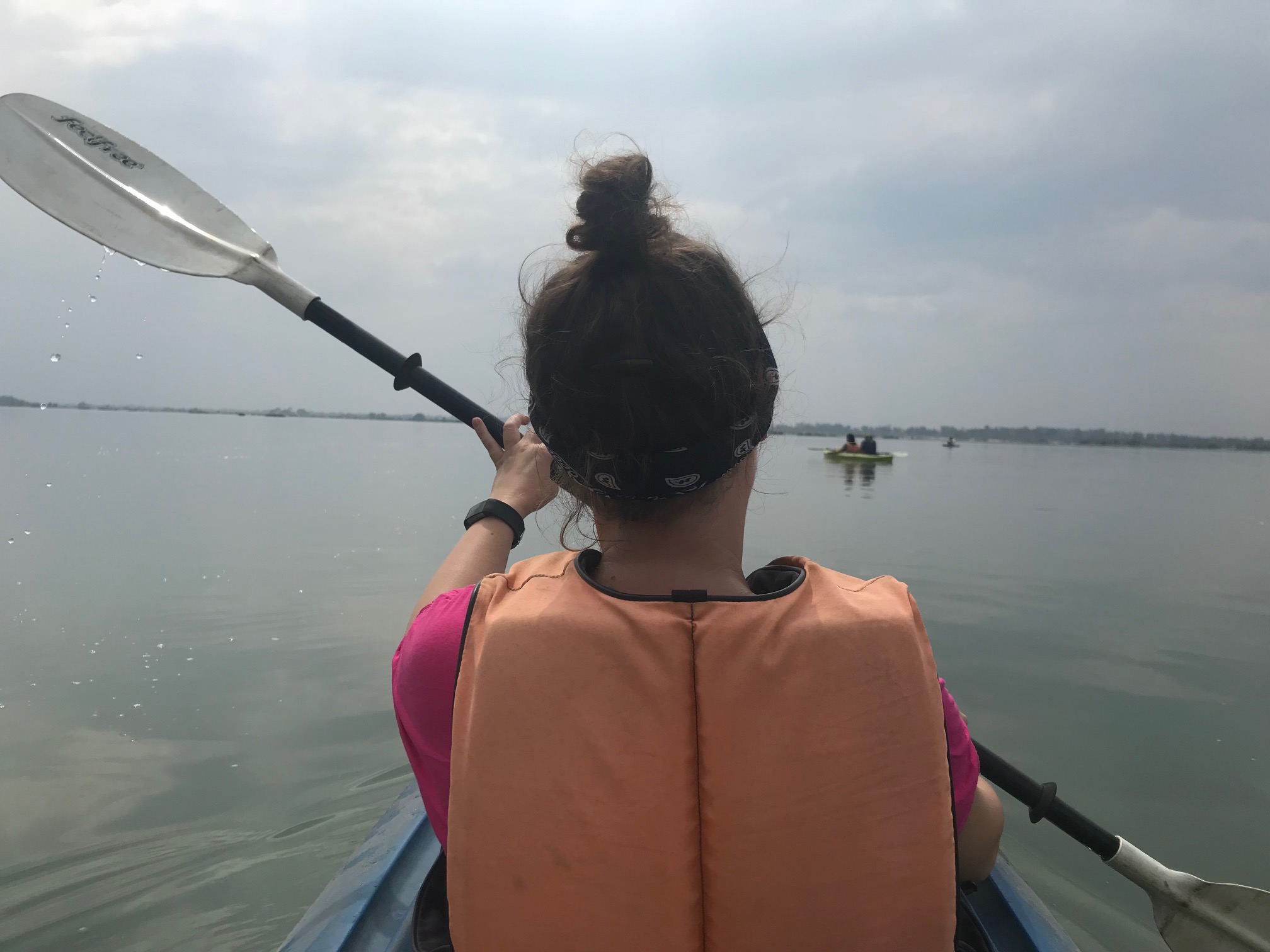 Downstream though, was much nicer. A further 20-30 minutes paddling took us to a small uninhabited island on the Mekong, with a sandy beach and sort-of inner stream where we could leave our kayaks then swim or sit on the beach. We were given a snack of sticky rice and bananas, whilst the guide talked extensively about the strife of the Irrawaddy dolphin and the efforts now being taken to try and save them (although sadly I’m concerned it is a little too late, plus reading of my own highlighted the fact that damming by the Chinese in Laos, is going to really affect the dolphins due to the underwater vibrations – which the Cambodian government can do nothing about).

We were warned the next section was fast and we had to follow the guide exactly, due to possible shallow water and roots of trees and vegetation in the flooded forest. By now, Mark and I were friends again and working bloody brilliantly as a team if I dare say so myself, so we were basically pros. The flooded forest was pretty, but it was a bit hard to get pictures as it did need both of us to paddle and effectively navigate that section of river – still Mark got a few snaps with the GoPro whilst I ‘manned the ship’!

We then stopped at another ‘beach’ and all stood/sat at the rivers edge: dolphin pool!! What we didn’t know before we set off, is that dry season is absolutely the best time to see the dolphins. The water level changes by up to 15metres in wet and dry season, and in dry season the water level of the Mekong is low, so the dolphins are basically confined to ‘pools’ of deeper water for catching their food. There were around 8 dolphins in this pool and because they were so close to the shore we observed them first, for a while, from the beach, then returned to our kayaks to see them from that perspective too. It was amazing, and amazingly sad, to realise we had seen around 10% of the worlds population in that one pool. *no pictures of dolphins as we only had the GoPro out of the dry bag at that time and we were too busy watching them and enjoying being there to take pictures*

After this, the sun was sinking lower in the sky, and we traversed the river again to return to the eastern side where we would be collected by the driver. Before reaching the east bank, we again stopped at a small (10 metre squared) island and the guide paddled to shore to buy us ice cold beers and we all stood with a beer watching the sunset over the Mekong. Mark thinks it is his favourite sunset so far. It was beautiful; and such a great end to the day! 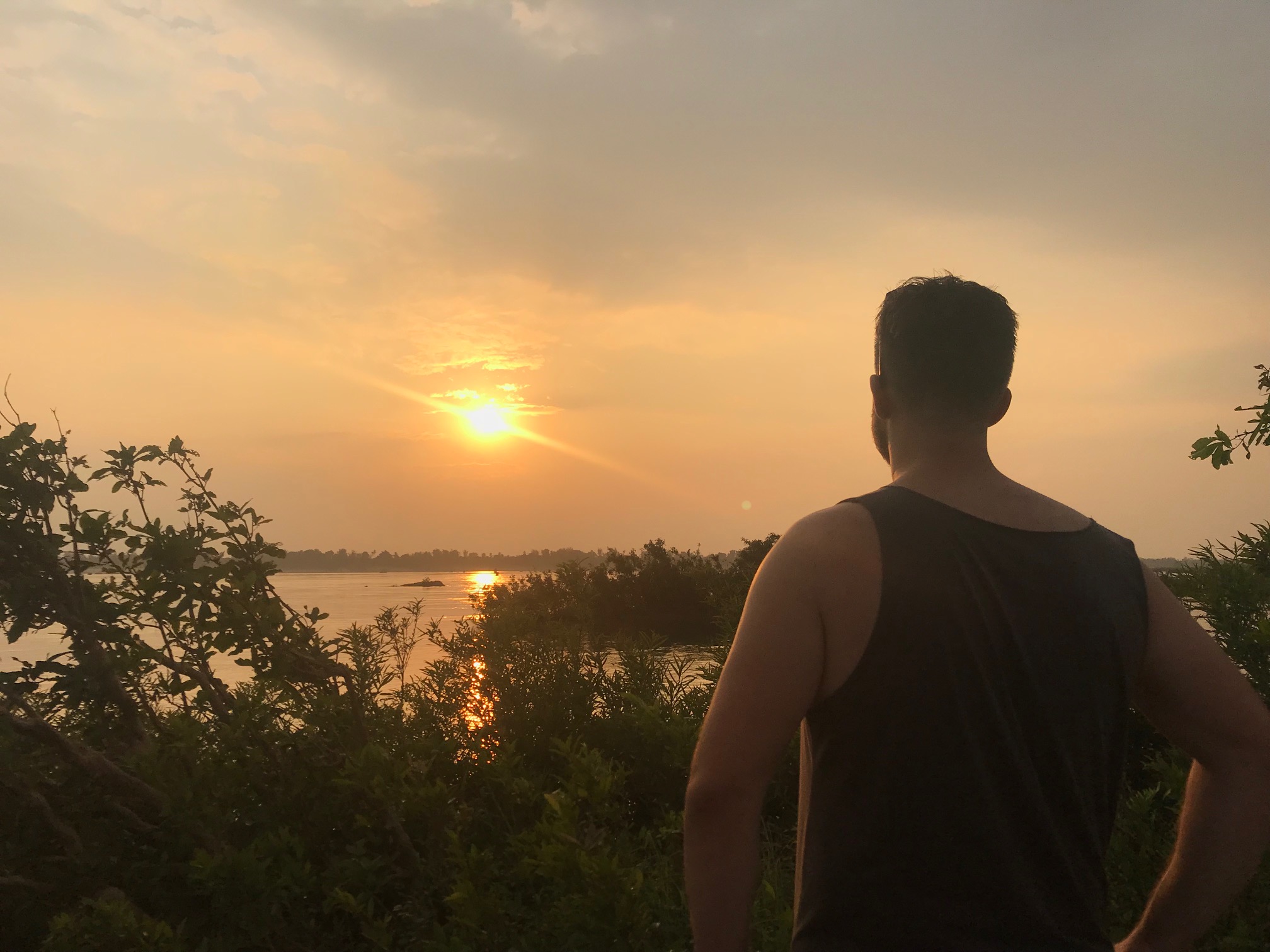 With slightly aching shoulders, we helped load the kayaks onto the truck and in good spirits headed back to town. We arrived around 630pm; we had been out for 6 hours!

We would rate Sorya Kayaking Adventures 11/10 if we could: What fantastic value for money – an active, fun day out, with exceptional knowledgeable guides and seeing the dolphins, forest, beach, with snacks and water included. On arrival back to the café, Pete told us that any pizza and a beer was $5 for kayakers, so we were sold on that too; and in the end there were 4 of us who stayed and ate the pizza and pasta – which were both delicious by the way.

I’m really trying to think of something negative to balance my, usually very critical, review of Sorya Kayaking Adventures, but I can’t.