Mount Hpan- Pu climb from Hpa- An- A short hike with the most amazing reward!! 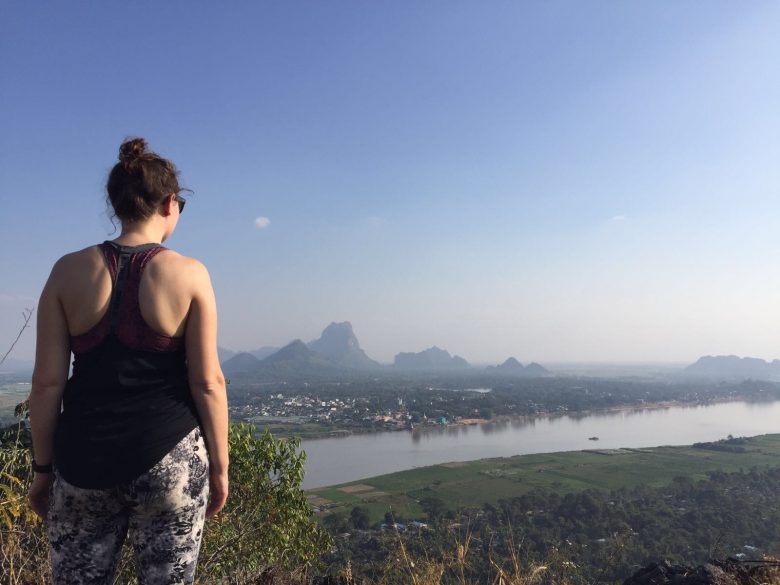 A short hike up Mount Hpan Pu– a little sweat for a big reward! Must do activity in Myanmar!

When our bus arrived into Hpa-An around midday, I knew the first thing I wanted to do was the hike up Mount Hpan-Pu and take in the afternoon sun. Nothing makes me want to hike more than travel days and feelings of wasted time, so as soon as we dumped our bags in the room at the guesthouse, I changed into my active wear, and off we headed.

Prior research indicated the best way to cross the river was from behind the Shweyinhmyaw Paya on the riverfront. We approached the waters’ edge and after a few minutes of watching local people loading and unloading produce onto and off wooden boats, we were approached by a man who said he would take us across the river. The crossing would cost 1000kyat for the two of us (£0.25p) each way. In the company of a couple of local ladies, and some fresh vegetables from the market, the crossing was smooth and took around five minutes to reach the river bank on the other side.

From here, we walked through a small village, with villagers tending to their vegetables and herbs growing on the silty river bank. There were helpful sign posts in English pointing the to direction of Mount Hpaan- Pu, which we followed obediently.

After only five minutes- walk, we reached some steps and another helpful sign in English announcing the route up Mount Hpan- Pu.

The first five- ten minutes took us through a small temple complex, passing a studying monk and a small area of their accommodation. The steps continued to reach a small stupa, where we took a short rest and drank some water.

After this time, the steps became dusty path and rocks – much like a climb up many hills and mountains; easy enough to gain good footing, but potentially pretty slippery if wet. This continued for another seven- ten sweaty minutes. This type of path culminated in a flattened area with some sort of watch tower of viewing platform made from bamboo – and bamboo ladders either side to climb up to it. We were astounded by the view and rested here for a brief time; excited by what the summit view would be if this were only a third of the way up!

After the watch tower of sorts, the rough path continued and there were three bamboo ladders to climb, in instances were a path or steps may have proved difficult to build maybe? Either way, the ladders were fun and felt strong, so we dutifully climbed them.

We reached the summit around 25-30 minutes after starting the hike. Very sweaty, but very pleased. We sat on the concrete base of the Stupa at the top of Mount Hpan- Pu in awe of the 360-degree view. The pictures do not even do this view justice! You could see for miles and miles and luckily for us we were the only people up there, and only passed one other hiker on the way too (why aren’t more people doing this!?). 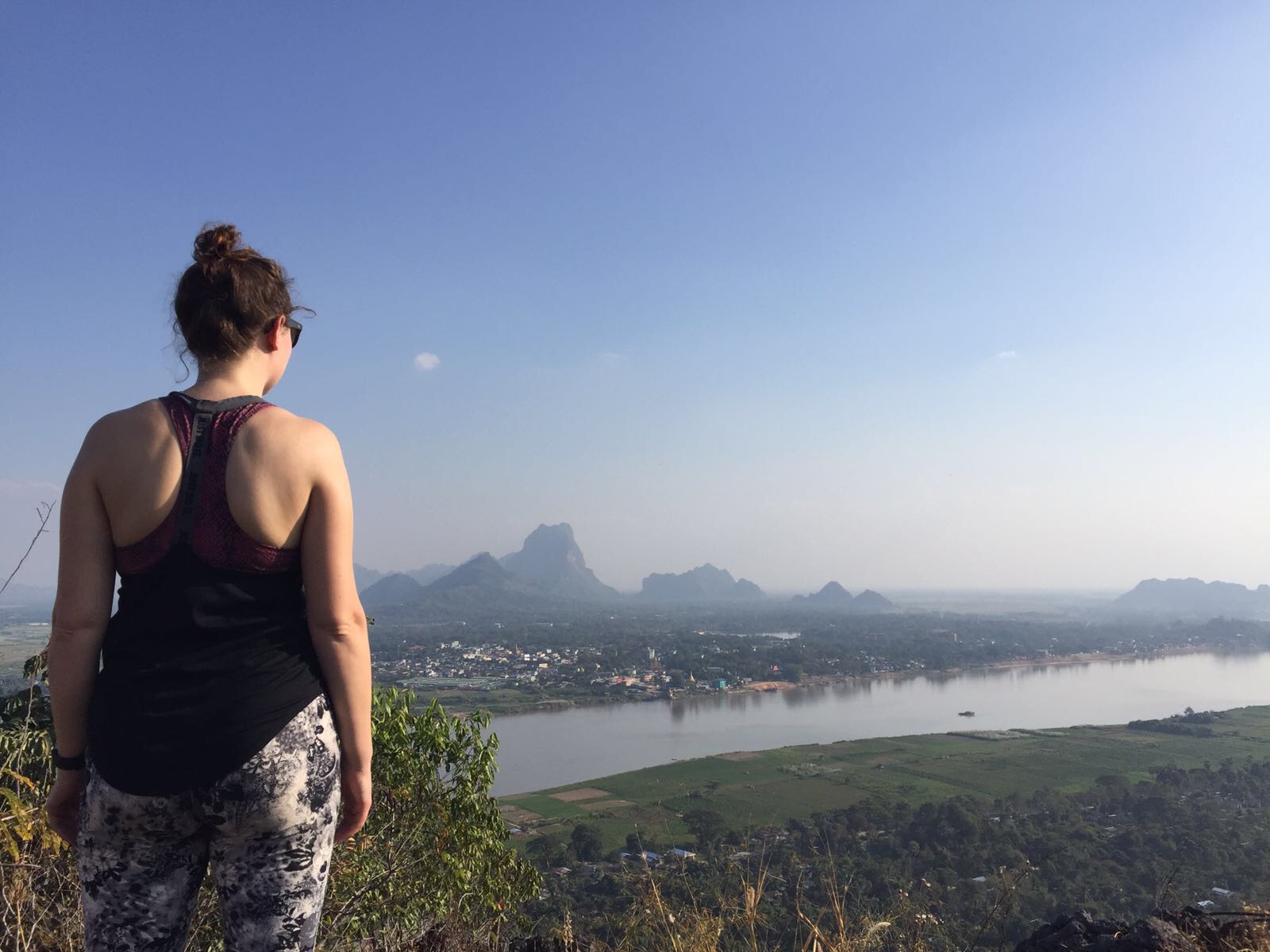 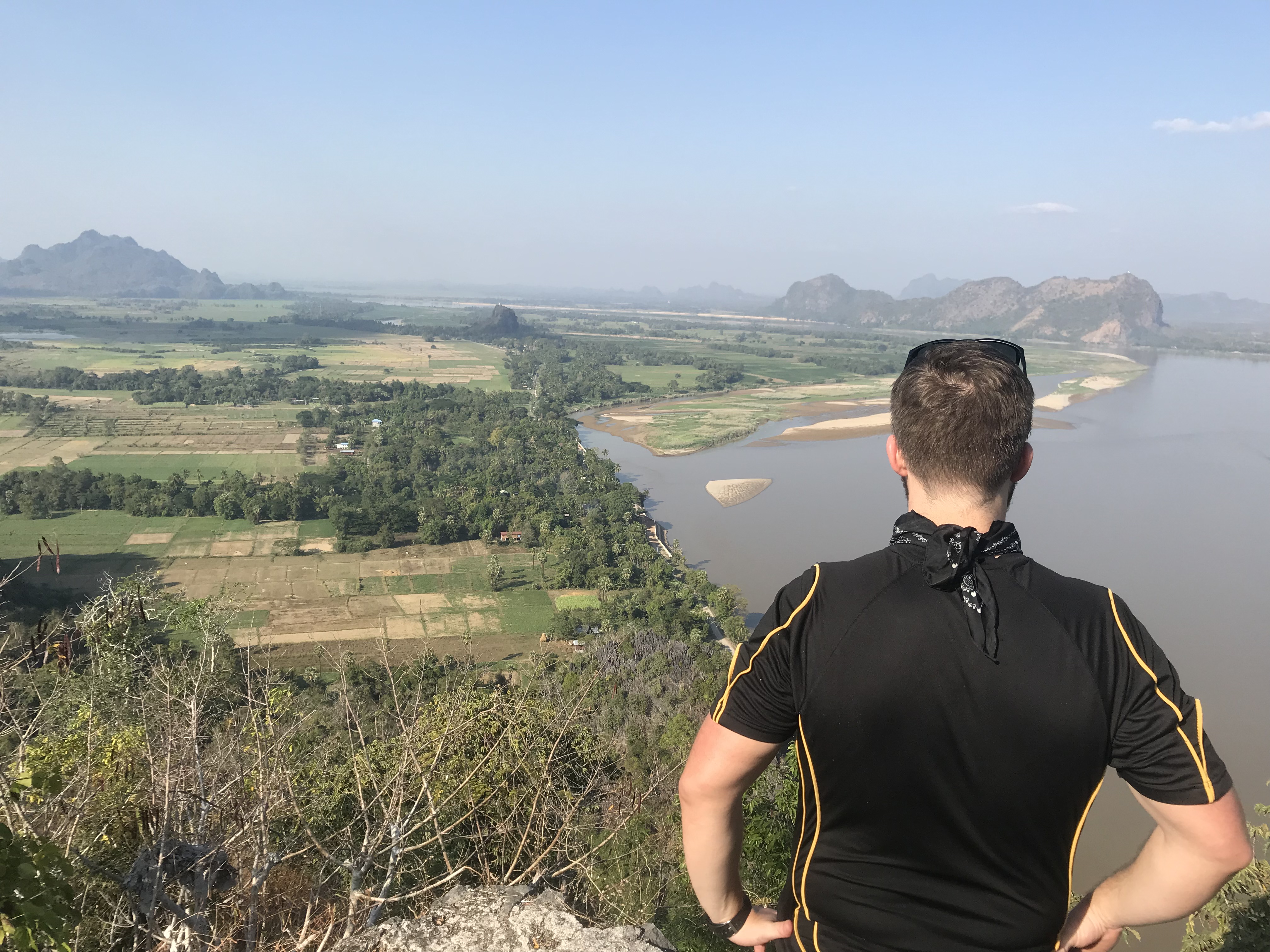 The descent was easier than I expected with the dusty paths and rocks proving easily manageable. We had to wait for all of five minutes for the boat to take us back to Hpa-An, only because he had to go and fetch a family member on his moped to bring them to the boat too. We were weighed down by vast amounts of fresh coriander too, which made the short river crossing and olfactory delight!!

This hike made us sweaty and red in the face, however, it was short and sharp, and over within less than half an hour. For anyone feeling nervous or concerned about fitness – there are multiple places to stop and rest on the ascent, should you need it.

Just remember the view is EPIC and totally worth the sweat! Just take lots of water and sunscreen! On another note; we were told that climbing in the morning, although still beautiful, often there is a lot of mist and haze, meaning views and photographs may be of a slightly lesser quality.

Let us know if you find this helpful, and we hope it gives you inspiration to do this afternoon hike too!!