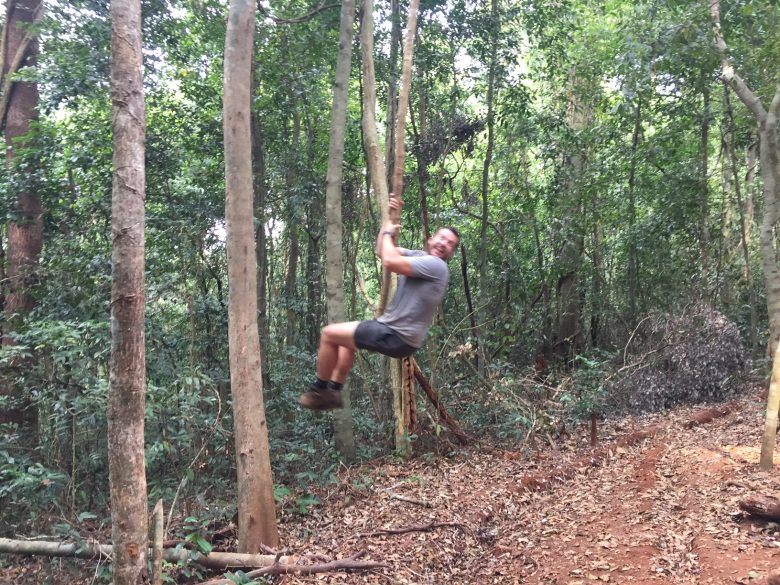 So… we arrived at Avocado Guesthouse relieved that we’d survived the journey but also eager to go and book some trekking. Whilst in Siem Reap we’d been messaging Sam Veasna regarding their gibbon experience. The emails were a bit erratic, so we decided we’d just speak to them via their representative at the Hefalump Café in Senmonorom. Unfortunately, they’ve not had a representative there for quite some time now and all their emails will have been from their office in Siem Reap. After one final email exchange with them we found that they did not have an English-speaking guide available for the days we wanted to trek and although they did offer to knock a small amount of money off, there’s no way we could warrant spending $180pp (2 days 1 night) and not be able to ask any questions.

“Elephant Tourism” is probably the most popular activity in Senmonorom and Elephant Valley Project seem to be setting the standard. This is probably why they are booked up months in advance!

We walked up and down the main street a couple of times, deliberated over a coffee and decided that the “Overnight Adventure” with Mondulkiri Elephant and Wildlife Sanctuary was where we would spend our money. We were due to meet them at 8:30 the following morning.

Even though we knew what time we needed to be there we rushed our breakfast of spicy vegetable fried rice paying at the same time the food was brought to the table so that we could make a quick getaway to the meeting place. We arrive bang on time and sat around waiting for other people to turn up (standard).

We loaded ourselves into the minivan, around 9 people in total, picking another couple up on the way. Once again we were dropped off on the side of a road with no clear indication that this would be the starting point for a trek. We stood on the side of the road and Sita (the guide) talked about how the day would work… So the tour we’d been sold was for an easy/moderate hike to spot wildlife with an overnight stay in a jungle camp then spending time at an elephant sanctuary the next day. What we were in fact receiving was that tour, but in reverse. We were the only 2 who would be staying the night – the remainder of the group were just visiting the elephants for the day. Slightly frustrated we walked 100metres up a hill to “Elephant Rock” before stopping again. Elephant Rock, so called because of the 2 men who visited friends in another village, on their elephants, were warned by the village elders not to travel back on the same day as it was too cold and dark. 1 of the men ignored the advice and attempted to make his journey and he, and his elephant, were never seen again. The large rock (if you look at it right) resembles an elephant and is joined by a smaller one which represents the man. There is a now a spirit house here where locals offer gifts to the gods.

As we climbed to the top of the hill, a strip of land with no trees is clearly visible, this was caused by Agent Orange being used during the America/Vietnam war. The aim of these chemicals was to clear the foliage so that people could not hide under it, also so that the land could not be farmed for food. It is apparent that is devastating effects are long – lasting.

We headed down into the valley where we conveniently came across the first elephant of the day being led by her mahout. Sita discussed the culture of the Bunong people, and their relationship with the animals. Still feeling a little sceptical after finding the trek wasn’t exactly what we thought it would be, we asked some fairly probing questions about the way the animals are treated, mainly “how can they be ‘free’ if they still have a mahout?” and “why does that one still have rope round its neck?”. 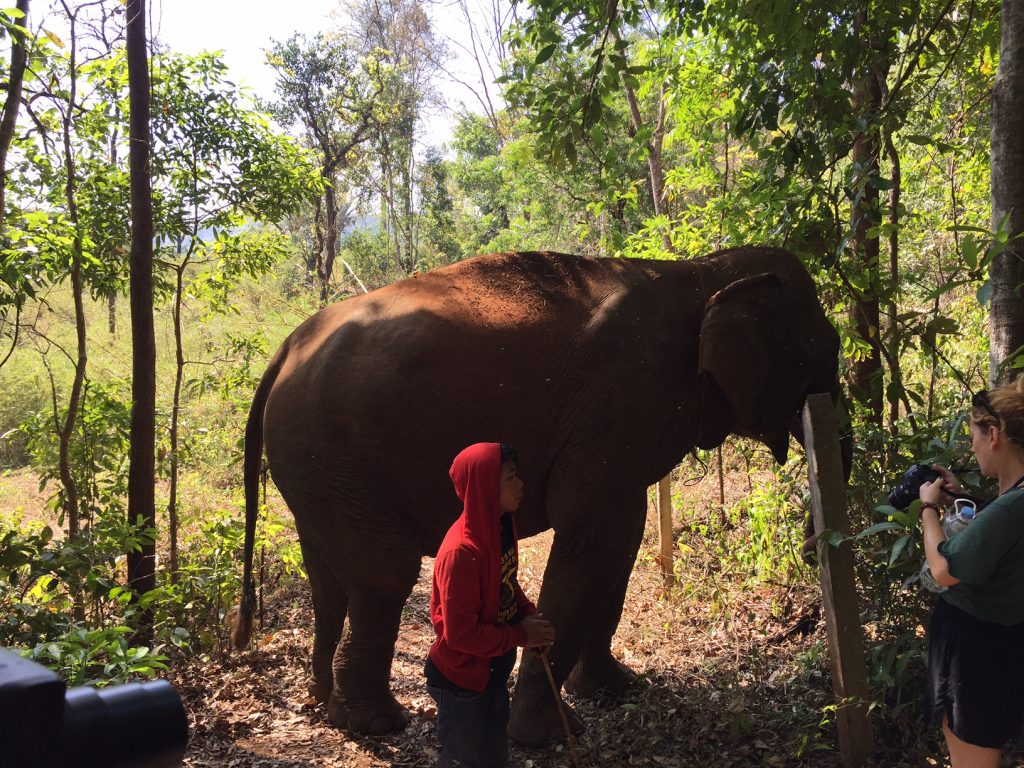 As with all elephant rehabilitation centres across Asia, these animals are usually retired. They still need human interaction and care rather than just being left to become wild (hence the mahout being around for them when needed and the rope in case control is needed in emergency). Some of the elephants in this centre were still owned by local villages (up to 42 families could own 1 elephant), and the money raised by the charity through donations and the trekking was used to almost rent the elephants from their owners. The money would help buy tools and training to eventually help the Bunong people live without the need of working elephants. There will eventually be no elephants left in this area as Bunong belief of no sex before marriage also applies to their elephants. With weddings costing up to $25k, this is not about to happen any time soon!

The centre also has a large community farm growing pineapple, banana, mango, papaya, sweet potato, wax melon, pepper corns and cashew nuts. The community help to maintain the farm and in return can pick the produce that they require. We sampled some pepper corns and they were delicious!

We then headed down to one of the waterfalls near the centre of the park. We saw how they were using the waterfall to generate electricity but also to pump water back up to the eco lodge. We all had a swim and chilled out here for a while before heading back up for lunch. We shared some stir-fried vegetables and an eggplant curry with some rice with some fresh dragon fruit for pudding! The curry was amazing!

Whilst the guides ate their lunch and then washed up we had some time to relax in the hammocks around the eco lodge, what a fantastic way to let your meal go down!

After lunch we walked down to a pool where the elephants were washed, the mahouts led them into the water and invited us to help bath them. We armed ourselves with stiff bristled scrubbing brushes and waded across the elephants waiting patiently for us to splash and scrub them. They seemed to enjoy it, although no trumpeting like the ones in Thailand. Sita explained that they wash them in the fresh water instead of letting them bath in the mud to stop them rubbing and potentially cutting themselves increasing the risk of infection. One elephant had recently had a snake-bite wound, so was being washed everyday as well as receiving antiseptic spray to the wound, to ward off infection.

We headed back to camp for some coffees and Sita relayed some further information about the sanctuary, before a short walk to another waterfall. It was nice to see that a lot of local people also enjoy the waterfalls. Groups of youngsters would turn up on their bikes, sit around chatting with a beer before clearing up after themselves and heading back to town. Once everyone had had enough this is where the “day trippers” left us. It was around 4pm so we grabbed a few beers from the local shop before heading back to the camp to relax in the hammocks before dinner.

After an hour of not doing a lot we decided that we should help prepare the dinner and skewered what felt like hundreds of beef kebabs. There was good reason for this, it turns out that it was Marinas (one of the volunteers) birthday and a few people from the village, the mahouts, the cook and their families had all come to celebrate. We shared beers, cooked the kebabs over the open fire and turned the lights off because candles had been lit all around us. Any negative thoughts from the morning had well and truly been forgotten about! The highlight was the happy surprised look on Marinas face when she saw the cake Sita had bought her and heard us all singing “Happy Birthday”. It was also so humbling to hear the owner of the local shop say that it was the first time she’d ever had that type of cake, and it was the first time the mahout had ever been brave enough to sit around the campfire with guests! He managed to say hello then was too shy. The stars came out and we made new friends. Such a perfect night. We had a pretty good nights sleep after all of that!

Lots of pancakes and syrup with the coffee from the Cambodian V60 was on the menu for breakfast. We’d spoke to a couple who had done the hike the day before and had said that it wasn’t very strenuous “just walking between a few waterfalls”. It turns out we’d been thrown in to the competitive group. The couple we were trekking with and collected on route to the starting point (they were doing their trip in the ‘right’ order!), even jogged when they went into the forest for a toilet break! We kept up, that’s all they’d allow us to do, if you managed to get in front you’d get fed up of warm breath on the back of your neck and just let them by.

Anyway, off we set with our lunches keeping warm in their tiffin’s through the countryside. We didn’t get to see much nature, although we heard quite a lot- and, sadly, a LOT of chainsaws. The issue here was deforestation. There were huge scars across the landscape to make way for banana or more profitable cashew nut plantations. It was awful to see.

We visited a couple of waterfalls. We stopped at Leng Kong for lunch (rice and omelette) then visited the pretty impressive Leng Kun. There were a few people swimming in the pool. There was also our guide in there with his fishing net. He managed to catch 4 which definitely would not be enough to feed his 12 children! Again, it was nice to see these areas being enjoyed not just by tourists but enjoyed by locals too.

The routes we took must have been used by all of the trekking companies as we managed to catch up with another group and followed them through the next 2 waterfalls. This provided one of my favourite moments of the trek, when their guide appeared to just run off into the distance. The next time we saw him he came swinging from behind a huge tree on a vine Tarzan style! Of course, we all had to have a go!

By the time we’d crossed the fast-flowing river (we all made it safely) and arrived at our guides’ village (where he took some time out to feed his pigs and chickens!), we’d clocked up an impressive 14 miles. We’d well and truly earned our Fantas! We were now the “day trippers” going back to town for a shower, a cold beer and probably another fried spicy rice!

There appears to be stiff competition for eco-tourism operators in Senmonorom and we’d heard stories (though didn’t experience it ourselves) of some operators discussing the authenticity of their competitors. My advice would be to do your research, if you have time go and speak to them all, ask to see how your money is going to be spent. If you don’t have time to do that and need to book before you get there, then email or whatsapp them, they’ll be more than happy to discuss itineraries with you.

We trekked with Mondulkiri Elephant and Wildlife Sanctuary