St Lucia 2015 – A much needed relaxing holiday, with a few mishaps…. 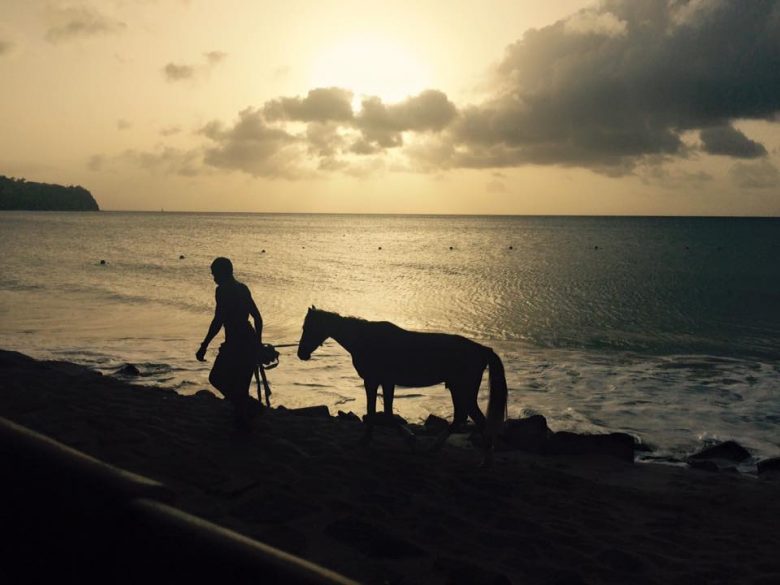 We stayed at the beautiful boutique Rendezvous Hotel in June 2015 for 11 days.
When we initially, impulsively booked the much needed relaxing trip, we just thought it was nice in the pictures and received great reviews. Nearer the time, we found out it was targeted to couples and romantic holidays (cue vomit in mouth apprehension), so on arrival we weren’t sure what to expect….

It was so amazing! It was mostly couples at the resort, but it wasn’t cheesy. The food was epic. Like 5 course breakfast from the buffet epic, then say you’ll be full until the evening, but go to lunch and share a carafe of wine over another amazing meal; then more in the evening. We never ‘all-inclusive’ so let’s just say we took advantage and over- indulged! As much as we slag those sorts of holidays off; once in a while, it was bloody amazing to be spoilt for choice with food and drink, take early nights and lay in and actually appreciate some quality time together relaxing. 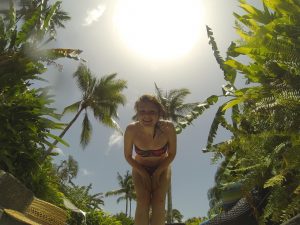 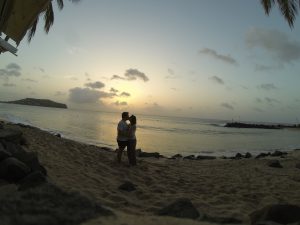 One day we spent on a catamaran exploring the coast line down to Soufriere where the imposing Pitons are found. From there we explored a waterfall and the active Soufriere volcano. 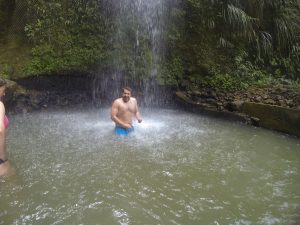 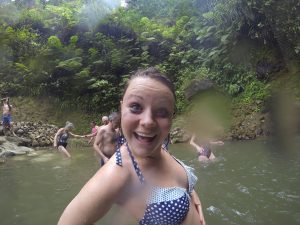 Soufriere was pretty- nicer than Castries. We were interested to learn that it used to be the capital of St Lucia before the volcano erupted and destroyed the city many years ago. On the way back, we had a delicious lunch, then snorkelled for around an hour in a beautiful bay not far from Soufriere. On the final leg of the journey we stopped in Marigot Bay and helped ourselves to unlimited rum punch as the sun began to set. I would highly recommend doing a boat trip if you go to St Lucia. Many of the islands’ hotels are in the north of the island. The beautiful Jade Mountain and other luxurious hotels are in the south, but not so many, so it is an effective way to see that part of the island you may otherwise miss. 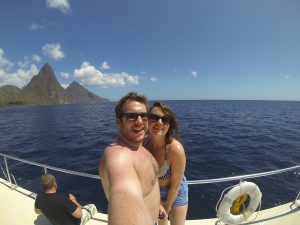 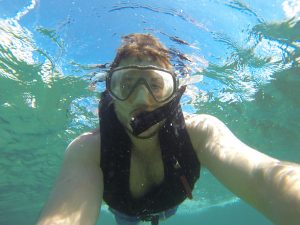 I’ve been a sufferer of ‘motion sickness’ my entire life.
I usually take travel tablets, however, I had not taken any to St Lucia, so Mark trotted down to the resort store on the morning of the boat trip to purchase me some travel sickness pills. It was basically an entire day on a boat, so I felt it was ‘better safe than sorry’.

Anyway, the day was beautiful, as I’ve described. On the final leg of the boat trip, we sat on the edge of the boat as it sailed along the coastline as the sun was falling from the sky, drinking rum punch and listening to reggae. Perfection.
As the boat docked (and I had to get up and walk), I suddenly felt very odd. I was talking to Mark and looking at him, but I definitely didn’t feel I was in my body: We checked the travel pills: Dramamine are the most wonderfully effective travel sickness tablets, but they say to “avoid” alcohol. Oops. Missed that bit.
For the rest of the evening, I was floating around in a trance. The waiter was talking to me at cocktail hour; I was definitely looking at him and smiling, but I have no idea what was said. I know he soon left! Mark did the talking. I couldn’t tell you what I ate or drank or what we did that night, but I know I felt great! People looked at us weirdly. Apparently we had an early night.
Moral of the story is to read labels of drugs you take! I clearly acted very oddly that night and was lucky to be in a resort where it was quiet and safe, rather than a city or hostelling. 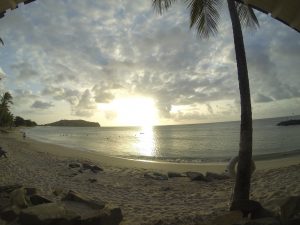 So, after a relaxing week in St Lucia, Mark decided to treat me to a helicopter tour of the island to finish the trip. He wanted to photograph and film the Pitons from the air with the GoPro too.

I’d harped on to Mark about how I rode in a chopper with no doors, hanging out darting game to be relocated in South Africa. I was in there for four months or so, and rode in this helicopter a few times. It was amazing fun. The chopper was tiny, with no doors and it flew super low, so the marksman could hang out the side to dart the wildebeest or giraffes etc. that we were relocating. I was 18 and it was cool and it never once made me feel sick.
After the Dramamine – alcohol episode, and the fact it was the last day and we wanted some ‘last night cocktails’ I gave the travel tablet a miss, because as I said, I’d been totally fine in choppers!

So, we’re sat in the waiting lounge for St Lucia Helicopters in a small airport near Castries and Mark is nervous. It’s hot were both sweating and the chopper is late. I am telling Mark all my gung-ho experiences from Africa, not noticing the increasing gusty winds outside, blowing the air socks completely laterally.
The chopper arrives, it seats six passengers! Bigger than what I’ve been used to! Four people squish in the back and Mark and I are told at to sit in the front. I’m in the middle almost on top of the pilots lap and Mark next to me. The pilot informs us we are on the limit of it being safe to fly in such winds, but that we still can. He gestures towards a stack of sick- bags near his controls.

So, we take off. Obviously vertically, my stomach drops, and we begin to head south along the coastline to the Pitons.

The view is lovely, but we are being seriously buffeted by these winds and the heat, gosh the heat; I am sweating so much. My pretty white cotton dress is already becoming moist in places and I’ll admit it now, I knew I’d be struggling to hold in vomit from the minute we set off. I began trying to breathe deeply and concentrated on the horizon to try and limit the nausea.

The pilot was brilliant, his accent was Australian, but he had lived in St Lucia for years and knew it like the back of his hand. We slowly hovered close to the mountain side until we were teetering over a Piton. The view was incredible. He asked if we were enjoying ourselves and it was the fun bit next! Then he swooped: The chopper just dropped and went sideways, flying down the mountain, along a valley, through dense jungle, like a rollercoaster for at least 5 minutes. The other passengers were squealing in joy! It was like a theme park ride with views! We teetered over another mountain whilst the pilot let everyone compose themselves and take pictures, then more swooping, up and down, up and down it flew, over waterfalls, the active volcano, dense forest, banana plantations, rivers and bays. All the time the pilot giving commentary to the amazed audience. Mark was constantly filming on the GoPro with one hand and taking photographs with the other. We began our ascent up the east coast to the North of the Island. Over pigeon island and rugged bays, back to Castries to complete the 30 minute- round trip. 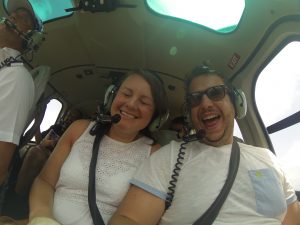 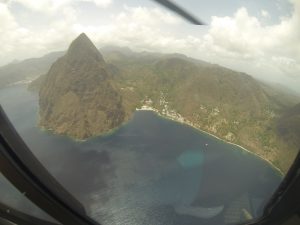 Apparently, it was beautiful. I don’t remember anything after hovering over the Piton. My eyes were mostly closed after that, but I had almost made it! I could see Castries! We were five minutes from landing. I was soaked in sweat and so close to being sick, but I was holding it in! I was doing so well! Then… I smelt vomit- a lady in the back had succumbed and had her head in a bag. So, straight away then; I vomited too.

We were landing as I was finally finishing bringing up my breakfast into a white plastic bag. I was dripping with sweat at this point and I had nothing to wipe my mouth on, so I used my little white cotton dress and wiped sick and make up off my face, all over it.
People were waiting to board the chopper when we disembarked. They looked nervous- the wind was ferocious. They saw Mark walk off first; grinning. He shouted to them how brilliant it was… He forgot he was waving at them whilst holding my plastic bag of sick in his hand like he’d won a goldfish at a fair! Was it that, or the image of me behind him, staggering, limp and bedraggled, holding down my sick stained skirt from blowing up in the wind, that made their faces drop? We will never know… Gosh, I wish I had taken the travel pill that morning. 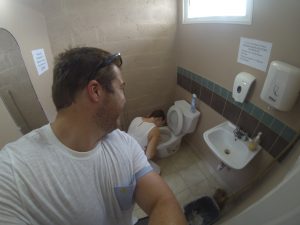