Like I said in the Saigon Street Food Tour post,  Vietnam was the country with the food I was most excited about. We cook and eat a lot of Asian food when we’re at home but Vietnamese is one cuisine we rarely sampled for a couple of reasons. Firstly, we’d never been. Secondly, there’s no Vietnamese restaurants in the town where we live. Finally, it’d always seemed quite expensive for what we now know can be incredibly cheap food, and by that time we’d have defaulted to Indian or Thai food.

So we entered Vietnam in the south and whilst waiting two hours for our connecting bus to Can Tho we excitedly sampled our first bit of Vietnamese street food. I don’t know the name, I’ll waste nobody’s time in finding out and making you read it because these “deep fried boring batter balls which could have at least contained either something sweet or something savoury or even just something” were the Collins English Dictionary definition of average! So here is the list of our favourite things we ate and where to find them in Vietnam*.

*Obviously this is not an exhaustive list because there’s loads more than the 15 places in this post.

Think of these as a sort of “Vietnamese fajita”, they were one of the first things we ate in Vietnam. Open the packet of rice paper then add some of the perfectly spiced grilled pork sausage/patties, some vermicelli noodles, green banana, star fruit, cucumber, pickles and chillies. Before you attempt to roll it, grab a handful from the huge plate of herbs, squeeze it in, wrap it up, dip in the fermented soya bean or peanut sauce then sit back, enjoy and repeat. We found ourselves wrapping up the fresh herbs and veggies until everything was gone. We ate at Nem Nuong Thanh Van.

The second time we tried these was in Hoi An. Rated pretty highly on Trip Advisor, Bale Well Restaurant serves these up in a pretty courtyard setting. The price is for a set menu which includes a small desert and the beers are cold. Although the food was amazing, it seems that all ‘foreigners’ get seated together away from the locals who appear to pay a different price. One was big enough for us to share, and with drinks it still came in under £5 (136,000VND to be precise).

Most people have heard of this meaty, soft, crunchy, spicy, sharp sandwich. Most people will also argue what makes a good one and that their favourite place is the best! The first I had was from Banh Mi Huynh Hoa in Saigon. It was recommended by TravelFish and was close to our accommodation. I queued for 10 minutes, handed over 40,000VND and received a paper bag containing my sandwich. Straight to the the “Shop n Go” (mini mart) on the roundabout to grab a cold can of Bia Larue and find a bench in the peaceful Tao Dan park, then enjoy. The bread was soft, the pate was decadent, the cold cuts were lean and the spicy sauce and crunchy pickles balanced each other perfectly. So perfectly that I completely forgot to take a photo. It’s nice and easy to find, just google it.

The second place was also a recommendation, this time from the receptionist of our hotel in Hanoi. We’d been out all day and I just wanted a snack. She told me to “turn right onto Quán Thánh, and go to the second place on the right, not the first place, make sure it’s the second one”. Tesco do a £3 meal deal, this guy does a 20,000VND meal deal (about 60p). Superb Bahn Mi and a soft drink! You can find him opposite the Hang Dau water tank on Quán Thánh.

If you’ve been to Hoi An you will have seen this on menus everywhere and if you’re going to Hoi An, make sure you try some! It’s primarily a breakfast dish, but I genuinely would enjoy it for any meal of the day. Think, thick noodles in Chinese five spice style broth, bean sprouts and some slow cooked pork on top. To this you add some more crispy pork and handfuls (literally handfuls, the dish will be accompanied by a plate as big as your bowl) of fresh herbs. We had this every morning in our homestay but it is available all over town. Sensible advice would be that there’s no point paying for an upmarket version in a posh restaurant, and go early as the herbs will be fresher.

Another speciality of Hoi An, this delicately spiced shrimp and prawn dumpling is steamed and then sprinkled with crispy garlic and served alongside a sweet dipping sauce. It makes a great appetiser, or as a sharing snack when you escape the afternoon heat. Perfect with an ice cold Bia Hoi. We ate these at Streets Cafe, 17 Le Loi Street.

This dish sits somewhere between Cau Lau and Pho. Thick (udon like) quang noodles are added to a savoury broth, with chicken, garlic onion and other herbs filling in the rest of the space in the bowl. Like Cau Lau, throw in handfuls of fresh herbs and smile as the chewy noodles and crunchy herbs perfectly complement the umami broth.

Tucked away in a small building on the northern fringe of Hoi An Old Town is Pho Xua. Around 60,000VND (<£2) will get you a bowl and a Bia Saigon.

You’ll see Bun (noodle) Cha (grilled pork) everywhere you go from street food stalls churning it out all day to a foreign chefs ‘fusion’ interpretation on the menu of an upmarket restaurant. Believe it or not, it is served with a plate of herbs (shock!) and a dipping sauce consisting of chilli, garlic, fish sauce, sugar, vinegar and water. The pork patty is delicately flavoured with garlic, shallots and caramelised sugar. I like mine smothered in the dipping sauce!

We made our own at the Herbs and Spices cooking school – 2/6 Le Loi Street, Hoi An.

Spring rolls are another item found on every menu in Vietnam. They’re great as a snack or appetiser, but when it’s boiling hot outside, sometimes you just don’t fancy something deep fried. The solution? Summer rolls! Rice noodles, cold proteins and fresh crunchy vegetables and herbs are wrapped in rice paper and enjoyed with a traditional dipping sauce or, an even more decadent peanut sauce. The best peanut sauce? That would be at “The Pub With Cold Beer” in Phong Nha.

Obviously this would be on the list, alongside Bahn Mi it’s probably one of the most famous Vietnamese dishes and is found everywhere (I even had a ‘Pho Essence’ beer in Hanoi). It consists of a broth, rice noodles, herbs and usually a meat. Pho Bo – beef, Pho Ga – chicken and even Pho Chay – vegetable. We tried a variety of Pho’s and they were all “alright”. The vegetarian versions were all a little bland and the meatier options paled in comparison to a Cau Lau. I guess we couldn’t love it all.

What’s pizza doing on a post about food in Vietnam? If you are craving some western food and pizza happens to be your guilty pleasure then please look no further from 4P’s Pizza. Unfortunately this isn’t a cheap option, but 4P’s appear to use the best ingredients (you can even sit up at the kitchen and watch your food being made). The beer selection is good too. They have the usual Vietnamese macro beers but also some nice craft offerings on tap too. 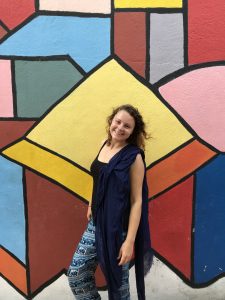